Kon: We don't hold the strings in our hands VIDEO 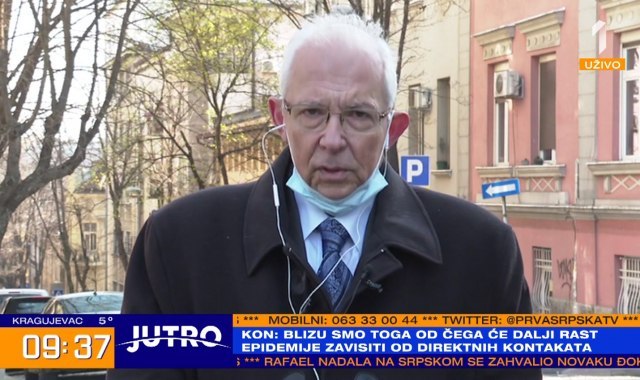 "We still expect the peak of the epidemic to be this and next week," Dr. Kon said, saying the results of the measures would be seen afterwards.

"We are in the 19th day of emergency, and that is reflected in the fact that we do not have a sudden leap in the number of infected, so if we did not introduce stricter measures, we would face with a sudden increase in the 4th week."

He stated that now we do not keep all the strings in our hands, because it is impossible to keep track of who is infected.

"Normally, the contacts of newly infected cases are being investigated to prevent them from transmitting the virus further. So, everything depends on how many contacts we have. If we prevent them, the theoretical viability of the virus is significantly reduced," he said.

"Everyone is expecting an end of the epidemic, and this is an announcement for the need for the steel discipline," he explains.

We are now at over 300 infected per day, and we had about 100 infected before - so now it's a matter of time considering introducing a 24 hour curfew.

"We are waiting to see the results of every measure. A weekend ban will give results in seven days," he says.

"I'm not covering up anything, but I am not expecting everyone to have all the answers either - it's not realistic," Dr Kon said, stating that he has been in the health care industry since 2006.

"It was a bird flu issue back then".

"Now that we have measures in the field of public health introduced, anyone who does not respect them threatens public health", Dr Kon said.

He adds that he is still a moderate optimist.

See more in the video attached.