President Aleksandar Vucic said three new measures have been introduced, including curfew from 1 pm on Saturday till 5 am on Monday 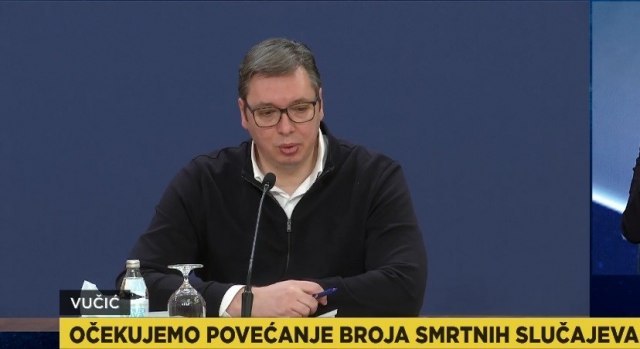 He said at a news conference that more than two people had been banned from gathering as of tonight.

"The first measure is to introduce curfew on Saturday from 1 pm to 5 am on Monday," he said, adding that the ban does not apply to the pensioners who can go to the stores on Sunday from 4 am to 7 am.

A new measure that applies from tonight is that no more than two people can gather in one place.

The third measure, which is valid from Saturday evening, is that from 23 to 1h in the range of 200 meters from the place of residence, pets could be walked by not more than two people together.

"We expect an acceleration in the next 72 hours in terms of the number of infected people, but unfortunately we can expect an increase in the number of deaths," Vucic said.

At the moment, 81 people are on a respirator, he said, adding that three people have died of coronavirus today.

"Somehow Nis, after many difficult cases and especially after the whole story of Lugan, somehow seems to us, although I do not rule out the possibility of additional contagion, managed to stop the spread of the virus", he said.

Vucic said that the equipment had been sent to Valjevo and Cuprija.

According to him, tomorrow at 11 o'clock the first plane with eight doctors and staff will arrive to Serbia from Russia with the equipment, respirators and medicines, which is the result of his conversation with Russian President Vladimir Putin today.

"I had a great conversation with Macron," Vucic said, adding that the French President also promised him assistance in this crisis.

"I asked President Macron to ask Sanofi to supply us with 50 kg of hydroxychloroquine feedstock, so that we could make the drug chloroquine ourselves and he promised that he would be able to send feedback in the next 48 hours," he said.

Vucic also said that Macron had told him - "Alexander, you have the support of France and please pass it on to the Serbian people. France will help you personally and your country, not only in your European path but also in this crisis."

He added that from April 8 or 9, we would be able to manufacture surgical masks ourselves, and that the machines would arrive from China.

Vucic said the introduction of new measures was discussed today and three measures were adopted.

He said that we have between 24.000 and 32.000 infected people who came to Serbia, but these people are not guilty of being infected.

He stated that with the arrival of one person from Milan to Kikinda, there were five deaths, in Cuprija and Valjevo as many, and in Nis four.

Hospitals well equipped, the peak of the crisis within next 15 days

He said our hospitals are well-equipped and have adequate respirators, as well as waiting for new equipment to be licensed to fly from China.

"We have huge reserves in the central warehouse. We have stable respirators in the reserve, and we have 130 mobile respirators, we have many epidemic masks, we have millions of them, and also 10 million gloves. We have no problems with any food," Vucic said.

"What is particularly worrying is that there are 12 infected people out of 23, the People's Front," he said.

"We bought and paid for 1.100 respirators and are waiting for them to be delivered to our country within the next three or four days. We have one married couple from Switzerland who sent us three respirators," Vucic said.

He said that he thought Serbia had introduced difficult measures in time, and that this "gave us a chance".

"We will experience the peak of the pandemic crisis within the next 15 days, when we will face with the biggest problems, which is why it is important to take care of ourselves now," Vucic said, adding that we should reach peak of the epidemic on April 15-16.

Vucic announced that Serbia will build an additional laboratory in cooperation with Chinese experts, in which it will be able to test the infected.

Responding to a journalist's question, Vucic said he did not know what happened to the journalist who was arrested last night, but confirmed that he had asked Prime Minister Brnabic to repeal the coronavirus information release decree.

"I ask the Government to ensure full freedom of information. Such news is easier to defend with our work and effort than in any repressive way," Vucic said.

He announced that he would especially on Vidovdan express gratitude to those who were the bravest and most deserving in the defense of our country, although, as he noted, "he does not like to assign the medals".

Vucic said no one waited longer than 24 hours for the test results and asked people to report the symptoms immediately as soon as they felt the symptoms.

Asked about the possibility of 24-hour curfew, Vucic said he wouldn't think for a second if the experts say it was necessary. He would introduce it and ban any movement, including going to the stores.

"That is the last resort. It is not a matter of sadism, but of protecting people's health. If we do not approach anyone within a meter and a half for 14 days, we will stop the contagion", he concluded.