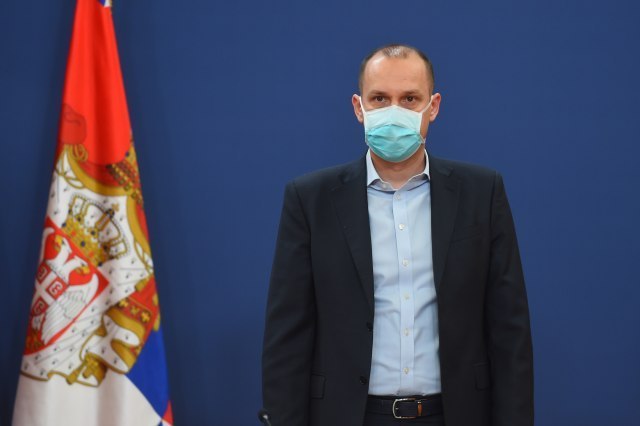 Health Minister Zlatibor Loncar said in the last 24 hours in Serbia, 94 people were tested, 54 tested positive, out of which 27 were kept in hospital.

"We have 21 patients who are on a respirator and they are with serious illnesses, which consider are at risk," Loncar said at a news conference at the Serbian government.

Loncar stated that eight respiratory patients were at the Infectious Disease Clinic in Belgrade, five in Nis, four in Novi Sad and Kragujevac respectively.

"The new method of combating coronavirus means that we will have more people tested. There will be one facility where the X-ray machine will be located and where all patients designated to be tested will come," he said.

Loncar added that the strategy would begin within two days.

According to him, Chinese experts have chosen the Belgrade Fair as a temporary hospital for the treatment of coronavirus-infected patients from all locations in Serbia.

"They chose the Belgrade Fair for control, because something has to be controlled. There must be separate entrances for patients, for doctors, nurses, medical staff, there must be some other factors that must be met to make it absolutely safe", he said. He added that it would take 48 hours to prepare it all and noted that he would accept and implement whatever the profession says.

He stated that the competent will implement and obey what the profession determines and recommends.

"I understand that someone does not like it, but I ask everyone to understand that in the situation we are in, we do not have much choice, we have to listen to the profession in order to be able to cope with the coronavirus," Loncar said.

The Minister confirmed that Chinese experts have assessed that VMA is not suitable for the treatment of patients infected with coronavirus.

"The Zvezdara City Hospital will accept patients. It has already begun relocating patients. As of tomorrow, VMA is functioning as a civilian hospital and will accept all those who are not suspected of being infected with a coronavirus," Loncar said.

Loncar noted that people who are evaluated by epidemiologists will be tested and said they should be tested. Epidemiologist Predrag Kon said the virus lingers in the snow longer than in warm weather, but that the virus is still present in humans.

"These numbers are not terrible, we are in day 19. However, the majority of those infected are over 50 years of age. The most serious forms of illness and death are experienced by the oldest.

He added that we were going for "total isolation" instead of home isolation, which he said, if implemented, there would be no problem.

"The new thing is that all the contacts of the person who went into isolation will be tested. Those who have been in self-isolation for 14 days and who are not ill will now be able to be tested. Then, we can argue that we will also be able to put the last case of COVID in isolation", Kon said.

Kon announced that self-insulation will continue to be implemented in the apartment, but will be tightly controlled.

Batut Institute director Darija Kisic Tepavcevic said the new strategy would allow better control of the spread of the virus.

"The bottom line is that we look for the virus and move from the person who has the infection to another person. We provide him with all the conditions for survival, and it is up to us to prevent it and stop the chain of infection," she said.