Assistance from the People's Republic of China has arrived in Serbia due to coronavirus. The plane landed, Chinese doctors greeted by President Aleksandar Vucic 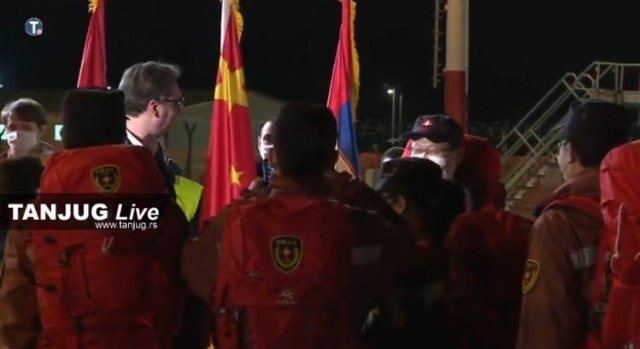 Serbia's largest aircraft, the Airbus A330, has landed in from China, with the largest shipment of aid to Serbia: medical devices, security equipment and Chinese experts.

There was a large round of applause as Chinese doctors exited the plane. They were greeted by the Serbian President. Chinese pilots pointed out Chinese and Serbian flags through the cockpit windows and waved them in response to the host's welcome.

"The arrival of Chinese health professionals is of great importance to us because they were the first to defeat the great enemy of today - COVID-19," Vucic said.

"Everything on this plane is free of charge assistance, a donation from the People's Republic of China. We should thank them with all our hearts, they have proven to be great friends of Serbia and Serbs," he added.

He thanked Chinese President Xi Jinping, the Communist Party of China and the entire Chinese people, as well as the Serbian people.

"I am waiting for Xi to visit Serbia and hundreds of thousands of people will welcome him," Vucic said. He also expressed his satisfaction that Serbia has A 330 and A 320 aircraft that can provide such assistance.

This is by far the largest shipment of medical aid to Serbia in the fight against the coronavirus, sent by Chinese President Xi Jinping.

Assistance from China was agreed thanks to the personal involvement of Serbian President Vucic. The medical aid packages that came from China read, in Chinese language and in Cyrillic, "The friendship of steel, we share the good and the evil!", with a heart that had the flag of Serbia on one side, and the flag of China on the other.

As previously announced, six top epidemiologists from the Wuhan area of ​​China, which was most affected by the virus, arrived with a medical team and their experience will be of great importance to doctors in Serbia. Moreover, another Air Serbia plane, the Airbus A320, departed this morning at 6:15 for Shanghai for a second round of aid, Tanjug told Air Serbia earlier.

Chinese President Xi said in a letter received yesterday by Serbian President Vucic that China supports Serbia's efforts to fight the coronavirus and will provide it with material and medical assistance, provide support in procuring essential goods from China, as well as professional assistance.

"We will also send a team of medical experts to Serbia to assist you in analyzing the situation and to share experience on controlling and preventing the spread of virus and treating the diseased, in order to increase the effect of combating the epidemic in Serbia to protect the health and well-being of the people", Xi said.

Serbia's President had earlier called on Xi to help Serbia, and Vucic's appeal was seen in China by about 500 million people.