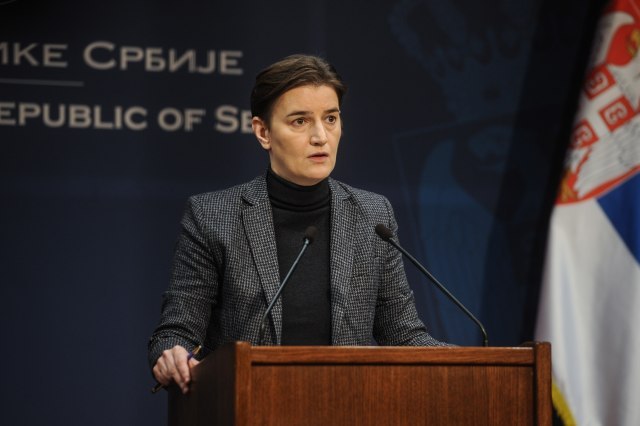 "The pensioners did not listen to our appeal and we all agreed at the Crisis Staff meeting that the situation regarding civil discipline was a concern," the Prime Minister said, announcing a Government session at which additional measures would be adopted.

"We will close all public service counters, both nationally and locally," the Prime Minister says, citing big crowds as a reason.

"We have a huge crowd, for example, at the Agrarian Payments Directorate, PIO Fund and other places where people came expecting not to be crowded," Brnabic said, adding that people who did not have something concrete to finish came to the PIO Fund , just to inquire about various things.

The Prime Minister pointed out that at a session of the Government at the departments and local self-governments, she would reach conclusion that all work at the counters would be postponed until further notice.

"At the request and advice of the Republican Health Insurance Fund, we will also add medicines to the export ban list for the next 30 days. We must first see what we need. We have enough, just in case."

The purchase of masks, protective gloves and disinfectants is restricted. According to the Prime Minister, the matter is that citizens also buy things in quantities they do not need, leaving no way for others to get the necessary funds.

"I'm sorry and I feel personally defeated that we have to introduce such measures. This is not only proof that there is no discipline, but there is almost no solidarity, which is devastating," Brnabic said.

"A maximum of 10 masks, 10 pairs of gloves, 2 packs of larger and 5 packs of smaller disinfectants," the Prime Minister explains.

Through the Ministry of Foreign Affairs, diplomatic missions and consular posts, the request and appeal will be sent again that citizens from these four countries are not coming to Serbia.

"If they come to Serbia, they will have to be quarantined for 28 days. Other citizens have 14 days of mandatory self-isolation, but as a crisis headquarters we now have a form to monitor citizens in self-isolation, in order to work together with the Ministry of the Interior, the army and volunteers and to the local governments to monitor whether this self-isolation is fully respected", Brnabic said.

For the time being, fines are being imposed on anyone who breaks the ban on self-isolation, and the punishment is a maximum of 150,000 dinars.

She was considering whether to start with a fine or a prison sentence.

"It is truly ungrateful to put our quarantine offenders in jail, and it is not safe at this time to prevent the introduction of a coronavirus into prison units", Brnabic concluded.

"We have a meeting with the president at 2 pm to agree whether it is necessary to impose a ban on anyone over 65 and a fine of 150,000 dinars for anyone who left their apartment or home and belongs to that group," she says, announcing that this is left for tomorrow, and is not being introduced at this time.

The PM states that if there is no self-discipline when it comes to moving out of apartments, then tomorrow morning she will "ban everyone starting from the age of 65 and up from leaving the house."