The Association for the Protection of Constitutionality and Legality launched an online petition with the aim of collecting the signatures of 10.000 citizens 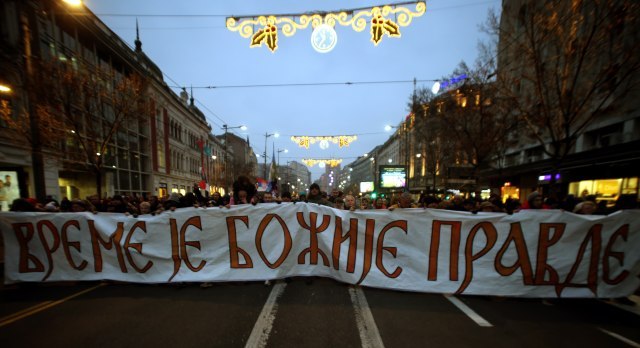 After collecting signatures, they would ask the state of Serbia to file a lawsuit with the European Court of Human Rights against Montenegro.

Association's President Savo Manojlovic told reporters outside the Montenegrin Embassy that they are seeking a lawsuit from Serbia for "violations of property rights, the right to a fair trial and the right to freedom of religion" on the part of Montenegro.

"We believe that this is a move that would encourage tension relief rather than issuing statements that spread hatred among peoples and raise tensions. The government doesn't need to do anything. It has an international tool at its disposal since both Serbia and Montenegro are signatories to the European Convention", he said.

As Manojlovic said, the Association has drafted the first version of the draft lawsuit, which it plans to give to the state of Serbia for free.

The Association put a billboard in front of the door of the Embassy of Montenegro in Belgrade with the inscription "European Convention on Human Rights", so that everyone who enters and leaves the Embassy "has to go over it". Treading on the Convention, as the Association stated, indicates the current state of affairs in Montenegro.

The petition can be found on the petition website peticije.srbijaupokretu.org