Patriarch Irinej says he believes that the situation in Montenegro, after the adoption of the controversial Freedom of Religion Act, will be resolved peacefully 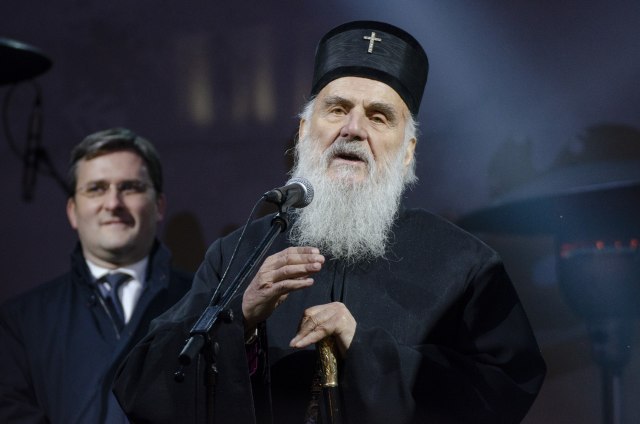 In an interview for daily "Kurir", he at the same time called on the authorities in Montenegro to "reason and come to their senses", expressing the hope that reason would overcome the problems and that the Serbian Orthodox Church (SPC) holy places would not be seized in that country.

"I hope that the Montenegrin authorities will think deeply, because they see the reaction of the people ... It is unreasonable what they did, it is a law that no one supports, every normal person is against such a law. Frankly, I did not expect it. I hadn't expected that they would adopt such a law", the Patriarch said.

Regarding the recent assault on the Vicar Bishop of Diocletian Metodije by Montenegrin police during protests against the controversial law, Irinej said it was an "unprecedented act in Europe since the fall of fascism".

"I pray to the Lord to reason with the people at the helm of Montenegro to end the violence and the abduction of property of the Serbian church", the Patriarch emphasized.

Warned by some bishops that a similar scenario was being prepared for Kosovo-Metohija, Patriarch said that it was impossible to predict whether such dishonorable intentions exist in Pristina.

"We cannot know if there are these dishonorable intentions, there are certain assumptions... Some other winds are blowing out there, we will see how it will end", the Patriarch said.

He added that we have permanent difficult situation at Kosovo and Metohija, burdened with so many unresolved problems.

Patriarch Irinej concluded in his Christmas message that the Orthodox faith has to be preserved at any cost.

The Church said that Patriarch Irinej will be serving Christmas mass at the Saint Sava Temple in Belgrade on Tuesday at 09:00 am.