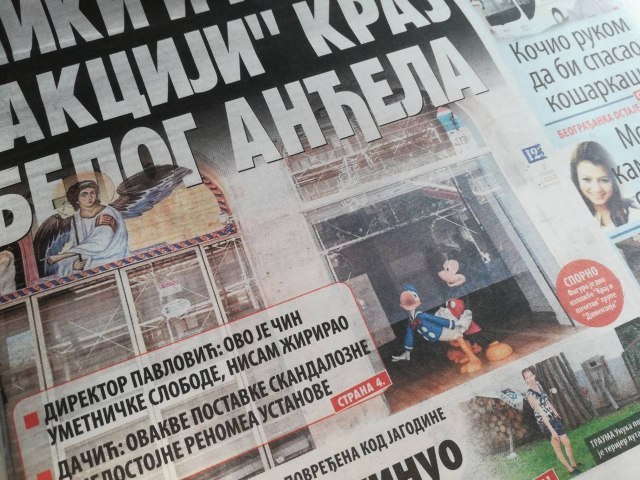 These two Disney characters have been standing there,"in action", for the last 10 days. The inappropriate sculptures were put below the huge photo of White Angel from the Mileseva Monastery, a trademark of this institution, writes Vecernje Novosti paper.

Serbs from Paris who sent the photo to the paper consider this kind of content unsuitable for representing Serbian culture in Europe.

"Ministry of Culture and Information approves the exhibits and programmes for the Cultural Centre in Paris. Still, in my personal opinion these sculptures are scandalous and unworthy of the institution they are exhibited in", says Dacic

The sculptures in question is the work of the artist Milorad Stajacic and are a part of the exhibition titled 'The End and The Beginning' opened on August 9.

Director of the country's Cultural Center in Paris Radoslav Pavlovic explains the figures as artistic freedom and notes that the project including these sculptures was approved at the Ministry of Culture's contest. He adds that he himself questioned whether the work was appropriate but realised it a kind of artistic provocation.

"We have to remember that sexual connotations in Paris have long ago stopped attracting public attention as they do in Serbia.", says Pavlovic

The Ministry of Culture and Information explains that this is the work of a renowned artist that their Program Council gave their expert judgement on and picked among two hundred projects in the contest.