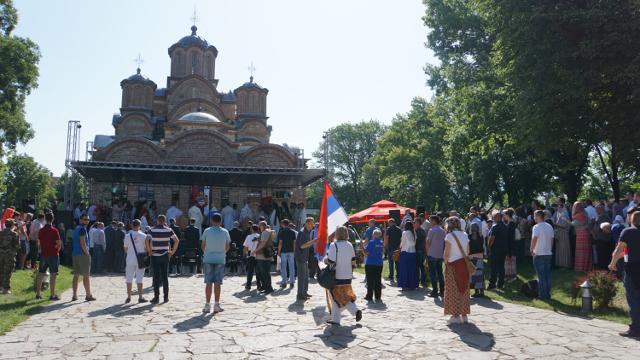 Participants arrive at Gracanica ahead of the ceremony on Wednesday (Tanjug)

On Wednesday, liturgy was served in the Serbian monastery of Gracanica, near the eponymous Serb enclave in Kosovo, to mark the 628th anniversary of the Battle of Kosovo, fought and lost on this day in 1389 by the medieval Serbian Kingdom defending against the invading Ottoman Turks.

Serbian Orthodox Patriarch Irinej led the ceremony, attended by about 200 believers from Kosovo and Metohija and central Serbia, and, among others, Prince Aleksandar Karadjordjevic and Marko Djuric, who heads the Serbian Government Office for Kosovo and Metohija.

In his address, the patriarch called on Serbs not to leave their homes in Kosovo and Metohija or sell their property.

Each part of Kosovo's land speaks about suffering, Irinej said, adding that, "where there is suffering, there is also resurrection."

"We admire those (Serbs) who stayed here. We admire their courage. We came to encourage those of you who live here to stay. Don't sell your land, because it is soaked with the blood of your ancestors," he said, and continued:

"Today we are gathered in this holy place, there aren't many of us, we are like that bird whose nest has been destroyed. Few of us are left in this holy Serb land. Every inch of this land is soaked with blood. Vidovdan speaks about Serbs being a people of God, a people called upon, one that carries God in it."

"If there is one day when we all think together, that fills us with something," Irinej continued, "it is Vidovdan. A great day when the Serb nation suffered its Great Friday, its crucifixion. And this crucifixion lasts to this day. As a nation we must carry the same cross that our Lord carried. What gives us value, is the soul inside us, the immortal soul."

But after Great Friday, the patriarch said, comes resurrection.

"We are a nation living on earth, but looking at the sky," Irinej said.

SPC's Eparchy of Raska and Prizren today presented medals to mothers of four or more children, while the Office provided them with financial assistance.

Djuric said that the state "will continue to help the Serb people and will not give up on Kosovo."

Members of the Kosovo police have been deployed about 100 meters apart along the Pristina-Gracanica road on Wednesday, and around the monastery itself.

Traffic leading from the center of the enclave toward the monastery was suspended by police, with vehicles traveling on the Pristina-Gnjilane road using auxiliary roads instead.

Later in the day, Patriarch Irinej will lead the traditional memorial service dedicated to Kosovo Heroes at Gazimestan, the site of the Battle of Kosovo.

Also on Wednesday, in the town of Krusevac, central Serbia, President Aleksandar Vucic attended a ceremony marking the anniversary.

"We must defend and preserve the two greatest values - the independence and freedom of Serbia and its citizens - because we won our freedom, we did not get it from great powers," Vucic said.