The MUP has announced that the police secured the Media Center building in Nis where a documentary about the 1999 war was to be shown on Thursday evening. 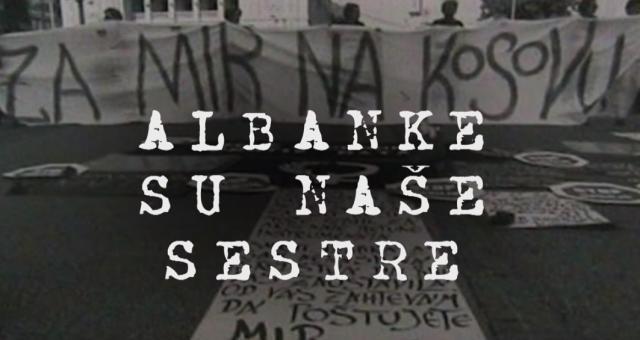 According to the Interior Ministry (MUP), several dozen citizens gathered around the building to protest against the film - titled, "Albanian women are our sisters."

However, the police denied the allegations that the building had been pelted with rocks or other objects.

Both the screening and a panel that was to follow were canceled yesterday evening in this southern Serbian town, with the Obraz Movement taking responsibility for the outcome.

The organization issued a statement saying that they acted because the documentary "hides an open hatred toward Serbia and the Serb people behind its seemingly peace-loving title."

They also claim that the attempt to show this and similar films represents an attempt to "change the mindset of the Serbs," and that this is being done by "anti-Serb NGOs."

In 2012, the Constitutional Court of Serbia banned this ultra right-wing organization.

The film, meanwhile, was recently shown during a festival in Belgrade - one of five making up the "Real people, real solutions" project dedicated to "relations between Kosovo and Serbia" and carried out by the Independent Association of Journalists of Vojvodina, BIRN Kosovo, Forum ZDF, with support of the EU Delegation in Serbia.

The film talks about the NATO bombing in 1999 and "people in Serbia who become aware with the start of the mobilization that they were being caught up by another war, and resist that, start deserting, while anti-war women activists demonstrate."

Those who appear in this film and speak about it, said they would do the same again.

Earlier, an organization in the town of Kraljevo in central Serbia, Lokalni Front, said that the announced screening of the film there "caused such dissatisfaction among a portion of Kraljevo residents" that they were forced to cancel the visit by the documentary's authors and producers.

"Although the protagonists are even our closest fellow citizens who speak about their suffering, although the film does not promote anyone's political stance, nor does it advocate anyone's interests, its fate was determined by its title," a statement said.