One of Battle of Kosare heroes honored with memorial

A memorial bust has been unveiled on Wednesday of Tibor Cerna, one of the 108 Yugoslav Army (VS) soldiers who died during the Battle of Kosare. 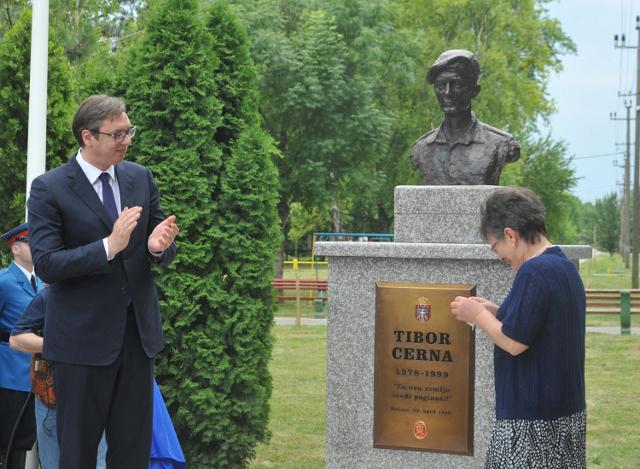 The memorial is located in Debeljaca, a village in Serbia's northern province of Vojvodina, and was unveiled by Cerna's mother Kata and President Aleksandar Vucic.

Cerna was one of the soldiers who died defending the Kosare outpost on the border of Serbia and Albania, that in 1999 came under attack by combined forces of the terrorist KLA ("Kosovo Liberation Army"), regular Albanian Army units, and NATO.

The initiative to install the monument came from the Association of of Veterans' Organizations Serbia.

The KLA launched a fierce attack on April 9, 1999, and managed to take the outpost - but failed to penetrate any deeper into Kosovo and Metohija, which was the main objective of the attack.

The Yugoslav Army had 108 dead soldiers, while the KLA lost more than 200 of its members.

During the attack, the aggressors had 24 Apache helicopters, 30 tanks, 24 armored personnel carriers and 24 multiple rocket launchers at their disposal, and continued firing on our troops for the next 67 days.

When the onslaught was launched, NATO forces numbered about 5,000 people, along with some 5,000 KLA and Albanian Army members.

VS intercepted the enemy's communications and learned that artillery and mortar attacks were precisely guided by persons speaking Italian and French.

Awareness that the fall of the front line would bring far more serious clashes with the KLA and NATO, with an uncertain outcome, kept the morale high on the Serbian side of the battlefield, Tanug reported.

Conversely, the enemy's morale suffered due to the VS soldiers' resolve to defend each position to the end, and to launch attacks in difficult weather conditions: in deep snow, ice rain, fog, and frost.

The goal of the combined NATO, KLA, and Albanian Army forces was to penetrate into Metohija and drive VS troops, up until that point well camouflaged and hidden, into the open - when NATO's air superiority would be taken advantage of.

The majority of the border units at Kosare before the battle was made up of 19 to 20-year-old conscripts, who were joined, during the battle, by a large number of volunteers from Serbia, and from abroad.

The battle was officially over on June 14, 1999, when the VS withdrew from Kosare, in accordance with the Kumanovo Accord singed with KFOR forces.