The first part of the mosaic for the largest dome of the Temple of St. Sava in Belgrade arrived in the Serbian capital on Wednesday morning. 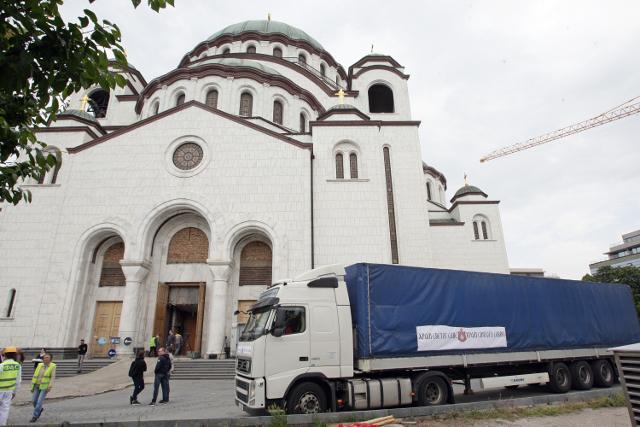 The 10-ton cargo traveled for over 2,000 kilometers through Russia, Belarus, Poland, Slovakia, and Hungary before reaching our country.

The mosaic, depicting the ascension of Jesus Christ, is the work of Russia's leading iconographer, Nikolai Mukhin.

The mosaic, that will have a 30-meter diameter and spread on an area of 1,230 square meters, weighing a total of 40 tons, will be installed by a Russian-Serbian team.

This work is expected to start in the coming days, while a ceremony to mark the arrival of the first part of the mosaic was held on Wednesday at noon.

The 4- million euro project, financed by Russia's energy giant Gazprom, should be completed by the end of the year.

St. Sava’s Temple is the largest Orthodox church in Europe, whose construction began in the 1930s in Belgrade's central Vracar municipality, at the site where the occupying Ottoman Turks burned the remains of St. Sava (1175-1236), the founder and first patriarch of the autocephalous Serbian Orthodox Church.