The difficult humanitarian situation in the parks in Belgrade, which began in early July, has not subsided. 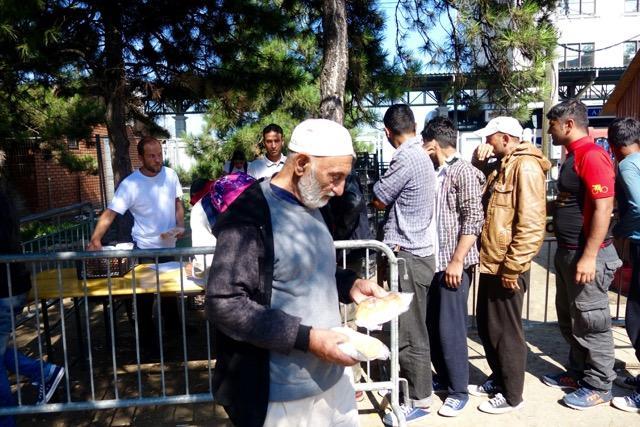 In the night and morning, workers of humanitarian organizations who were on duty near the Faculty of Economics and the Hotel Bristol, counted more than 600 refugees who had spent the night outdoors.

This time the weather served them, with the night passing without rain, and with a sufficient number of blankets.

Unfortunately, this part of the city is still without sanitary facilities that would be available to this many people. According to unofficial information, the asylum center in Krnjaca has virtually been emptied, with less than 100 asylum seekers there now.

Refugees without registration papers are banned from entering the camp while the majority of other users have been transferred to Adasevci, Sid and Principovac in recent days.

The morning distribution of meals has been organized by Info Park and Caritas, and went very peacefully and in the best order, even though the largest amount of food so far has been distributed.

Along with Info Park's workers and volunteers, refugees themselves by and large took care of maintaining order and a dignified character during the distribution.

The humanitarian organization Caritas distributed 1,000 packets of sweet and savory pastries on Tuesday morning, with 520 people signing the form, which is a record figure since the food has been distributed in Belgrade.

Info Park, a project set up by the B92 Fund and the Trag Foundation that provides logistical support for the food distribution, distributed over 500 cups of tea and coffee. As of this writing, 30 minutes before the start of the distribution of lunch at Info Park, a long line was formed with more than 200 refugees patiently waiting to receive the meals provided by Info Park along with its partners C&A Foundation, AXA Insurance and Help Now Switzerland, Covekoljublje (Philanthropy), and Jesuit Refugee Service (JRS).

In recent days, since the state authorities began to deny entrance to refugees without registration papers into asylum and reception centers, the number of people in the parks that are cared for by humanitarian organizations active in Serbia has increased.

There are fears that in the coming days some of these services will be further reduced and the humanitarian situation further deteriorated, which was already evident during the recent rainy nights when a coordinated action to use the existing capacities was missing.