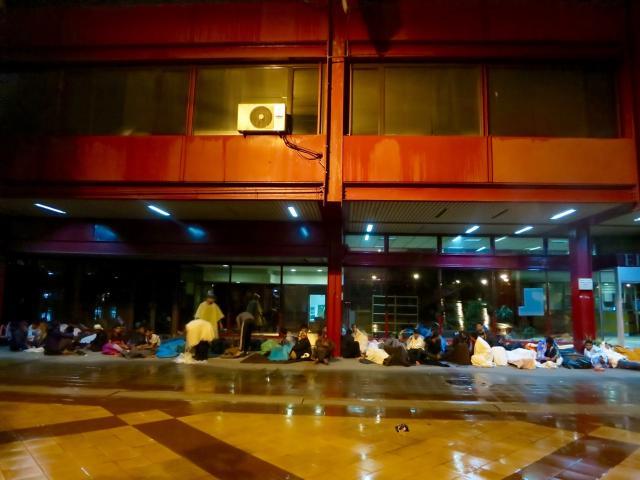 The weather also exposed a weak system of refugee protection.

The difficult situation for refugees who arrived in Belgrade on their way to the European Union has further been aggravated by the bad weather, which also exposed the weaknesses of the local system.

In the night between Friday and Saturday there were about 250 people stranded in Belgrade, while according to unofficial figures the number rose overnight to 400.

The rain created more problems over the weekend, so the situation was no better the following night. Most of the newly arrived refugees, among whom were many children, slept in Belgrade's public garages near the bus station and under the eaves of the Faculty of Economics.

Also, groups of refugees managed by sleeping wrapped in blankets at entrances of apartment buildings in Gavrila Principa, Nemanjina, and Karadjordjeva streets.

It took only a few hours of heavy rain for the already weak and inadequate system of refugee protection to fall apart. Beside the insufficient amount of blankets - which were distributed by Doctors Without Borders and the Info Center for Asylum - there was no other help for the cold and wet people, among whom were minors aged 12 to 15 years, without shoes and socks and with wounds on their heads inflicted by Hungarian police officers at the border.

Praxis and Info Park workers were occasionally present with the refugees, while citizens brought cigarettes and other small help. MUP patrols visited this part of the town a few times, too.

Although it is expected that in situations like this all humanitarian resources are made available to refugees, it once again turned out that Belgrade lacks greater accountability of state institutions, civilian humanitarian actors, as well as stronger coordination by international umbrella organizations.

According to reports from on-duty teams that have been touring this area, the brightly lit space of the new, renovated Humanitarian Center was also observed empty and locked, while only a few dozen meters away a large group of refugees slept in an open vestibule. On the second night, several refugees were seen finding shelter from the rain under the entrance to the shut down Miksaliste venue.

Only a year ago, Belgraders self-organized to transport refugees, under the same conditions, to their homes or to safe shelters, while today the organizations which took over the public mandate have been enclosed in rigid bureaucratic decisions, failing the test elemental humanitarianism.

During the day on Saturday, the asylum center in Krnjaca was emptied with refugees taken to reception camps in Adasevci and Sid. Extensive checks were also launched to determine whether refugees had registration papers that allow them access to the camps.

Unfortunately, there has been a lot of evidence that the MUP's Directorate for Immigration in Savska Street was either not issuing these papers, or was sending refugee to centers far away from Belgrade, including Tutin and Sjenica, from which they have been known to run away after a short time.

In the morning on Saturday in a park near the Bristol Hotels refugees received 800 servings of breakfast. Although the park seemed to have less people due to the bad weather, as soon as the distribution of the food started, hundreds of people who were hidden nearby started to come out.

It was expected that during the course of the day the previous day's record number of meals distributed by Info Park, 1,460, would be exceeded.