High temperatures and record activity in the parks around Belgrade's main bus station were reported on Wednesday, Info Park has announced. 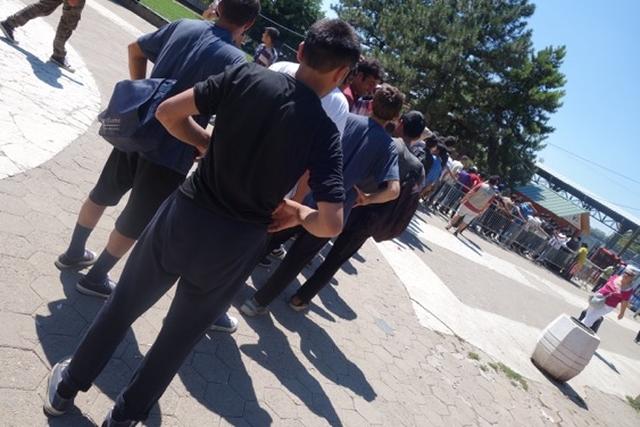 At this point there are around 1,200 refugees in Belgrade each day, while there are at least 500 at any given moment, according to data from the Commissariat for Refugees and Migrations of the Republic of Serbia. Compared with the situation a year ago, from the beginning of July 2015, this is a significant increase in Belgrade.

Compared with the situation a year ago, from the beginning of July 2015, this amounts to a significant increase in Belgrade.

The Asylum Center in Krnjaca is full and often turns back newcomers. Due to insufficient capacity, refugees are sent to other centers, including Sid, Tutin, Banja Koviljaca. Now between 150 and 200 refugees sleep in the parks and that number is growing every night.

Every day, new and growing groups of returnees are arriving from Hungary, whose authorities are sending them back to Serbia outside international procedures and protocols, using radical repressive measures. There is a large number of new arrivals from Bulgaria and Macedonia while a significant number is made up of refugees who have been stuck for a long time in Belgrade, without funds to continue their journey.

Belgrade is almost certainly moving toward the situation similar to August 2015 when the parks were full of refugees.

Info Park, which currently operates as an umbrella for a number of organizations helping refugees in the park, yesterday distributed a total of 1,260 meals, which is also a record figure in 2016. Organizations such as Refugee Aid Serbia, Covekoljublje, Caritas and JRS (Jesuit Refugee Service) currently defend the park from a humanitarian catastrophe, but this assistance is not sufficient, as there is a shortage of of bottled water and groceries adjusted to the weather conditions, primarily hot meals.

The risks for humanitarian workers in the park have also greatly increased. So far there have been several attacks that have thankfully passed without serious consequences. Although under stress due to the reduced level of protection, refugees are now showing a very high level of responsibility for peace and security in the park and usually regulate the distribution of food, clothing and hygiene items themselves, and isolate potential troublemakers.

Aid workers in the park are exposed to enormous tension, stress and overload due to the sudden circumstances under which they found themselves after the Miskaliste distributive center shut down, with a unilateral decision to stop providing services to all refugees in need of assistance. Instead of creating a coordinated and accountable system which would take into account the resources of organizations involved in humanitarian work, now the full burden has fallen to several organizations whose resources are not adjusted to the situation. A situation has been created that is totally unsustainable in the longer term, and the only question is when it will collapse under the weight of the obligations that far exceed the capacities. There are no indications that the state authorities will address this in a responsible manner that would prevent serious consequences, although this situation should be their area of responsibility.

Info Park, among other things, is now making great efforts to improve the hygienic situation in the park and raise awareness among the beneficiaries of humanitarian aid about the necessity to dispose of the garbage themselves after having their meals. Unfortunately, the main problem remains the lack of sanitation facilities. There are still no toilets in the park at the refugees' disposal, while last year there were more than 20. The level of health care is also unsatisfactory. In high temperatures, refugees frequently faint due to dehydration and sunstroke. Most medical teams are now close to the Hungarian border although the situation in Belgrade also requires their engagement.