Emergency situation in several regions due to flooding

An emergency situation has been declared in Cacak, Topola, Bajina Basta, Pozega, Novi Pazar, Arilje and Lucani, due to heavy rain and flooding. 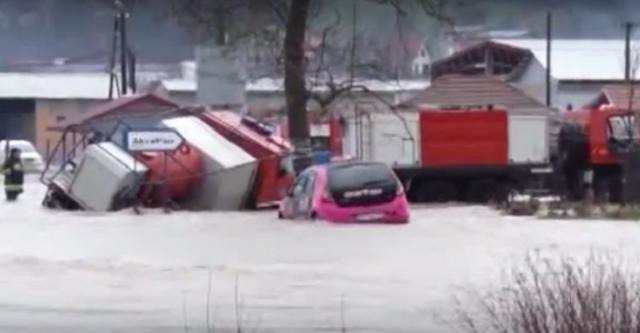 In Bajina Basta, western Serbia, landslides have been activated, with several homes submerged in water, and roads damaged.

In Preljine, near Cacak, where about 80 liters of rain fell per square meter during the night, River Cemernica broke through its embankments.

Local officials said on Monday that 420 people had been evacuated from the villages of Konjevici and Preljine.

MUP Emergency Situations Sector chief Predrag Maric said earlier that 15 people had been evacuated overnight, and that water levels were rising on big rivers elsewhere in Serbia, but that serious problems are not expected there.

He explained that Kosjeric, Arilje, and Cacak saw flash flooding, and that these municipalities were warned on Friday this might happen.

About 100 people have been evacuated from their homes in the area of Novi Pazar.

Meanwhile, yellow alarm has been issued for the rivers Danube, Tamis, Sava, Drina, Western Morava and Ibar. This means that water levels are rising on these rivers and could result in the need to implement measures for regular flood defenses.

It was previously reported that River Bjelica had flooded and shut down the Lucani-Guca road, while the same situation is reported from the Guca-Cacak road.

At the same time, about 500 hectares of arable land has been flooded in the Lucani municipality. Among the flooded structures are the administrative and business premises of the Milan Blagojevic factory and the local healthcare center, as well as the hospital, a school, and the main power station in Guca.

In Pozega, western Serbia, heavy rain has caused flooding from streams and rivers, while the extent of the damage was not known on Monday morning.

The Hydro-Meteorological Institute (RHMZ) said late on Sunday that Serbia can expect from 20 to 40 liters of rain per square meter today in southern, central, and eastern areas, and that road traffic may be disrupted as a results.