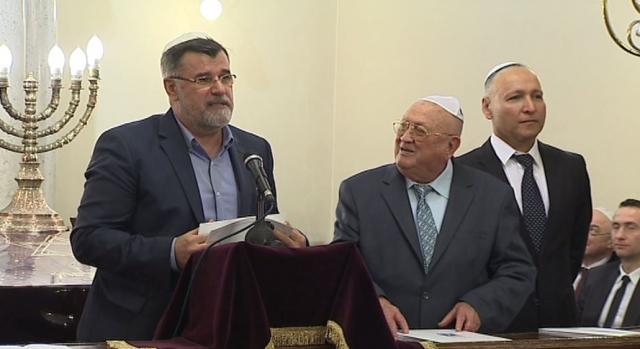 The ceremony took place in the Belgrade Synagogue on Tuesday.

The charters for outstanding contribution were given on the occasion of International Holocaust Remembrance Day.

"This charter is a high state recognition of Israel by which we want to emphasize your commitment to fighting for the truth to the benefit of the Jewish people, but also to the benefit of the people of Serbia," said Holocaust survivor Josef Zamboki, who initiated the giving of honors and presented them to the recipients.

Among those who received the accolade, signed by Israel's minister of foreign affairs, were Serbian Labor Minister Aleksandar Vulin and B92 Fund President Veran Matic.

"I hope that this year will see the fulfillment of what I have been thinking about for a long time, and that is for Belgrade to get the Memorial Center Old Fairground and the Museum of Holocaust," said Matic.

A gala concert will be held on Wednesday in Belgrade to mark International Holocaust Remembrance Day - Zamboki' gift to citizens of Serbia.

Some of the artists are visiting Serbia for the first time, including Olga Makarina, a longtime member of the Metropolitan Opera.

A commemorative gathering will also be held in the Cultural Center Rex, where visitors will be introduced to short life stories of five Holocaust victims.