In the last 24 hours, 9 more have died from coronavirus, of which 7 are male and two are female, with an average age of 69. 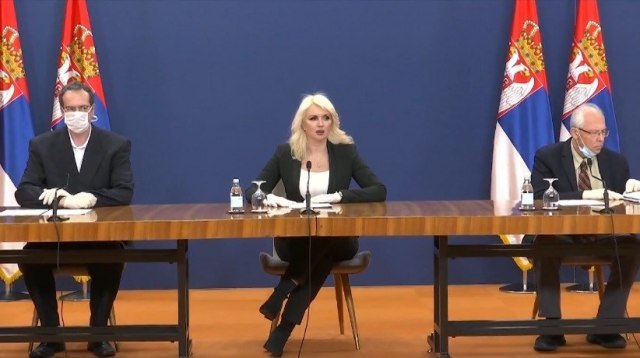 In that period, 2,440 people were tested, 411 of which were positive, said the deputy director of the Batut Institute, Darija Kisic Tepavcevic, at a news conference at the Palace of Serbia.

A total of people tested positive in Serbia since the first case appeared on March 6, was 4.465, while 3.006 are hospitalised, while 131 are currently on ventilators.

The mortality rate is 2.1 percent.

Talking about COVID-19 mortality statistics in Serbia, Dr Kisic Tepavcevic said that one person, in the age group 30 to 39 had died, as many as 12 died in the population between 40 and 49 years old.

The highest number of deaths is between 60 and 69 years.

The average mortality in Serbia of coronavirus is 64.5 years.

The number of healthcare workers infected is 533, while 1.062 are awaiting test results.

According to her, coronavirus has been reported in many nursing homes, with a total of 208 users and 30 employees infected.

"If we continue to act responsibly and conscientiously, then we can rightly expect that there will be a downward trend on the epidemic curve soon, and that our fight against this virus will be over," she noted.

Dr Kisic Tepavcevic said that Easter is the most joyous holiday we are always looking forward to, but this year, we are facing with a specific situation.

"It seems that we never needed more faith, strength and will to preserve ourselves and our beloved ones. The professional standpoint here is unanimous and clear - any kind of gathering and reckless behavior that will increase the risk of continuing the infection presents high risk generally to the health of our population. There will be no compromise here", she concluded.

Epidemiologist Predrag Kon said he was attacked for his work and wanted to retire from Crisis Staff.

"That level of insolence went beyond what one could accept, and that's one side of that story," Kon said.

He added that he was deeply affected by the request of the SPC Synod, as it completely negates everything that has been done in an attempt to save lives so far.

"I really felt the need to withdraw," he said, adding that he had met with the president and the prime minister.

According to him, the attacks on the Crisis Staff became uncontrollable and unacceptable after the critical situation at the Gerontology Center in Nis.

"It is as if they have come together allying with the virus against all of us who fight the virus," he concluded.

Kon said that what happened at the Gerontology Center in Nis will have a big impact on the overall situation in Serbia.

"The Nis Clinical Center has 377 COVID-positive ones," he said.

Talking about Serbia's preparedness, he said that it is ready for the second wave and had enough respirators in reserve.

"I think these capacities will be sufficient," he concluded.