In Serbia, five more coronavirus patients have died in the last 24 hours, bringing death toll to 71. 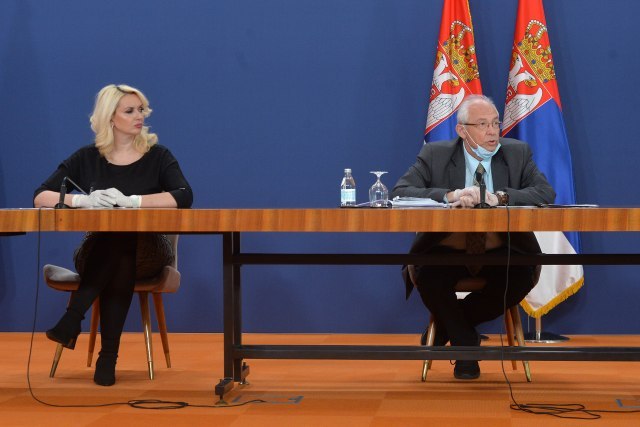 In Serbia, 1.893 people were tested in the last 24 hours, 238 of which were positive, Darija Kisic Tepavcevic, Deputy Director of the Batut Institute, told a news conference.

2,107 patients were hospitalized and 136 were on the respirator.

"In our country, 14.240 people have been tested so far. In the last 24 hours, another five people have died, four men and one woman," Tepavcevic said.

The total number of deaths in Serbia thus increased to 71.

Mortality is 2.29 at the moment, added Dr Kisic Tepavcevic.

340 people were hospitalized at the Zemun Clinical Hospital and 364 patients at the Zvezdara Hospital.

Dr Kisic also stated that 232 people were accommodated at the Belgrade Fair, in the Cair of Nis and the Centarturist Hotel 279, at the Novi Sad Fair, 123 people, and in the VMC Karaburma 64 people.

"About 650 people are housed in improvised hospitals and as a rule, it is not a long stay in these hospitals," she said.

She noted that in hospitals, it takes an average of two weeks to keep patients infected with coronavirus.

"There are 223 people employed at Torlak, the presence of the virus is registered in 12 of them," Dr Kisic Tepavcevic said.

When asked if the President of Serbia was tested because his older son was infected, she said that the testing procedure was the same for everyone.

"All individuals, after detailed epidemiological testing, and after considering the need for testing, in case the person is under 65, there is no need for self-isolation," she concluded.

Dr Kisic Tepavcevic noted that now is the right time to do our best and she hopes that the epidemic will soon be over in Serbia.

"The deadlock was in getting timely results, and all those who were scheduled for testing, were tested. We will get more and more requests for testing, as more and more people have had contact with laboratory-confirmed cases," said Dr. Kisic Tepavcevic.

Kon: The last measure is to open schools

Epidemiologist Predrag Kon said that a test criteria were made, such as high temperature (over 38 degrees), shortness of breath or bilateral pneumonia. These are three indications for coronavirus testing.

"The Fair as a large capacity was not planned only for Belgrade," he noted.

As he said, we finished the fifth week and are in the sixth, which means that the epidemic is at its peak.

"One possibility is for the virus to enter a sensitive population and the other is to ban contacts completely," Kon said.

Kon said it was important to make people aware that contacts were unacceptable.

"I try to explain that holidays are the most sensitive period for the virus to pick up. The moment it stops and gives way, then there is a critical mass when it starts up and gets the ability to restart the disease," he said.

He added that "we are still doing fine."

Kon said it was the numbers that made the decision, and that the measures imposed should be rationally loosened.

"We will follow the experience of others as well, because it is very important. We will also see the experiences of others, especially our partners from China. There will certainly be relaxation of the measures, especially for those who suffer from being isolated all the time, I think we will relax measures for this part of the population", Kon said.

"The last measure is to open schools," Kon said.

Kon warned that now we should decide in a prudent way when the schools would open.

Kon said he prefers summer school because the virus is then transmitted more quickly and children will gain immunity before the fall.

"We have to properly assess the risks, so that the risk of something erupting again is as low as possible. Cafes are a risk, a gathering too, but life has to go on. We cannot stay locked up forever, this will end," he concluded.

He said that a large number of coronavirus-positive people had entered Serbia in the previous period, but did not know exactly what the number was, as it is estimated at 1.000 tested among those who came from abroad.

He added that about 15.000 Serbian citizens have returned to Belgrade and they are in self-isolation.

Kon explained that if the epidemic spreads, it lasts for about six weeks, but if extended, it can last up to 12 or 13 weeks.