"The situation is dangerous and requires high responsibility" VIDEO 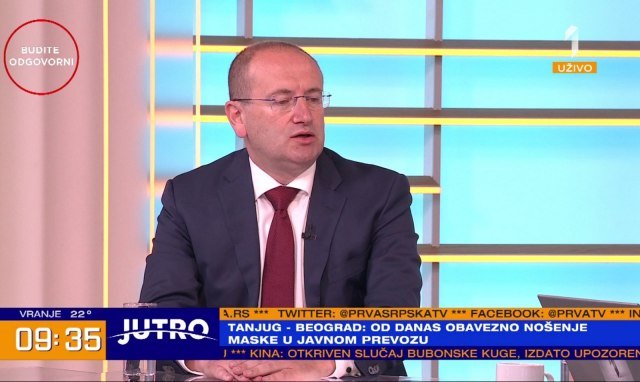 "The health care system is overburdened, all this has been going on for more than four months, the workers are tired, and there are more and more patients now," Gojkovic said.

As he said, although they thought that the health system would rest during the summer, the situation is such that it demands responsibility and care from all of us.

"It is a very dangerous situation, if we do not overcome this situation in a month or two, when the fall comes and colder weather, we will be in trouble because we will not be able to take care of all patients with COVID infection," Gojkovic said.

"The leap in the number of infected people is directly proportional to how we behave, that is, whether we started wearing masks, because then the transmitted tendency is significantly reduced," he emphasized.

He said that we will continue to have growing number of patients, because we are "paying for our irresponsible attitude" from last week, but that he hopes that the number will decrease after the introduction of all new measures.

Gojkovic adds that the hospitals were filled due to other problems, not only due to COVID infection.

"We have to understand that unlike March, when we had an increased number of patients, we now have a big problem with non-COVID patients, a large number of traffic injuries, we have injuries at work. When you reduce movement, reduce fluctuations, you have less cases", Gojkovic said.

As he said, during the state of emergency, there were fewer heart attacks and other problems because people were staying at home.

He explained that one of the reasons for the relaxation and re-growth of the so-called patients is the absurdity of success.

"The absurdity of success means that most of us did not have a relative or acquaintance who fell ill or died of COVID, people are not afraid of sirens at night and therefore do not have a developed fear for which they would be extra careful," Gojkovic concluded.

He said that, for example, after the emergency situation in Kragujevac, a number of infected people moved to Kraljevo and continued the night entertainment there, which then develops additional problems.

"The virus is not particularly choosy, young people can get seriously ill, and those who do get it can transmit the virus to the elderly and the elderly contract infection, even if they have no symptoms, and that can be a huge problem," the provincial secretary of health stated.

"Until a vaccine is found, we must learn to live with the virus," Gojkovic added.

He added that after a serious traffic accident on the territory of Vojvodina, it was found out during the operation that one of the minor participants was positive for coronavirus, which led to problems because it puts the entire ward in danger and a part of the hospital must be closed due to the spread of infection.

In some homes, we have 500 to 1000 people who are paralyzed and immobile, the entry of coronavirus into such institutions is simply a disaster.