Brnabic: "If the numbers are not under control, restrictive measures again" VIDEO 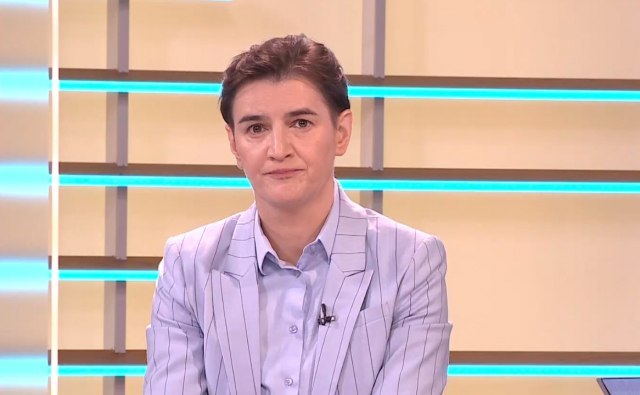 "At the moment, we have good numbers, that is, we have an obvious drop in the percentage of positive cases of people tested. This morning and last night - below two percent, we will wait until 3 pm. Today, more than 100.000 will be tested, so we have best results in this part of Europe," Brnabic stated in TV Prva's Morning program.

As we relax restrictive measures, people have to have personal responsibility, she said, in order not to increase the number again.

"If we do not see with the relaxation of measures that the situation is under control, we will have to re-introduce restrictive measures."

She said she could not talk about the dates for the lifting of the state of emergency and that they had to see the numbers and wait for a profession assessment.

"When the state of emergency is lifted, what will continue to be the prevention and protection measures will be our new 'normality' by the time the vaccine is discovered. There will be a ban on movement, curfew. At the end of all, we will open the borders. It will depend on how the numbers go", Brnabic pointed out.

She also said that she expects few people to come by plane because few airports operate, and that it is easy to control these people, easy to do tests for everyone. Everyone will undergo 14 days in isolation.

"We have been preparing for the weeks before the first identified case in Serbia. We started working with the profession on February 25 and 26, I think they were at the height of the task and we can be proud of them."

She stressed that it was very important that throughout the crisis we did not have a shortage of food or medicine, as well as mass burials, we did not see people on the floors of hospitals, because of the work and discipline that makes her proud of our country.

"We had our citizens in the diaspora asking us to send medicines for shortages," Brnabic said, adding: "Serbia acted as a safe harbor." We have increased our testing capacities through PCR tests, she said.

"Absolutely no country was prepared for something like this, but we were more prepared than many," Brnabic said.

"No country can compare with us in the number of respirators. And that is the credit of Aleksandar Vucic".

According to her, the Swedish model of creating collective immunity has never been considered in Serbia, because you have to pay for that in human lives.

"The noise at 8 pm is a political abuse of the worst kind. I think 90% of it is political. It is not spontaneously created and organized and thanks to them, you have no applause for medical professionals," she said.

"Serbian citizens could see, even before the decision to suspend the election campaign, Serbian President called on the parties' representatives for election consultations, where a broad consensus was reached. Even then, Vucic said that before the decision to resume the election, actions would be taken and I think it is one of the best practices, and it shows that you have a fair and democratic election", Brnabic said.

As we relax the measure, we plan to test how things will go in kindergartens, city traffic, in the economy, especially in large enterprises.

She expects the end of her mandate in a specific way, in a pandemic, pointing out that she is satisfied with the work of the Government of Serbia.

"I am satisfied with my team. There has never been less dissent and different opinions. Someone worked less, some more, depending on the nature of the department, but it was done in a team manner," she concluded.