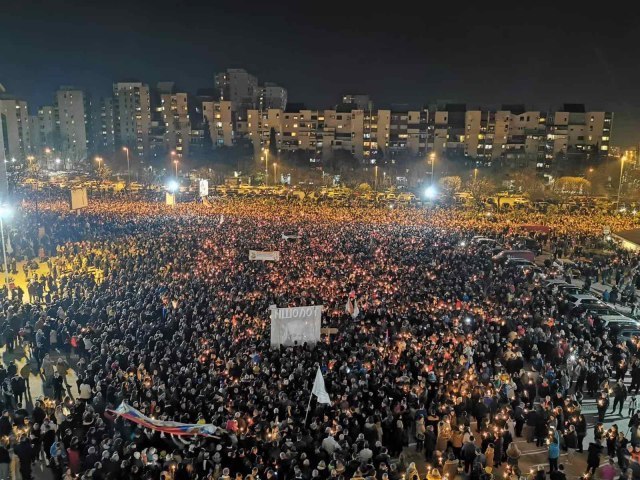 He stated that the position of the Episcopal Council, the clergy, the faithful and the citizens who participate in the liturgies in that country is to go all the way till the goal is achieved, and that is - the "victory of Christ".

Amfilohije, in an interview with "Novosti", however, warns that "the regime shows such stubbornness and aggression" that he has the impression that it would not shy away from the use of violence and said that "everything the regime does is based on lies."

"There is no withdrawal, no return. Our people - from child to old man - have returned to themselves, and that energy is unstoppable", Amfilohije said in protest against the Law on Religious Freedom in Montenegro.

Recalling that Montenegro has experienced fratricide several times in its history, he stated that he is concerned that he recognizes the roots of this in the actions of the current Montenegrin government.

"The liturgies are peaceful, and the people taking part in them show extreme love, tolerance and reconciliation. I see the danger of conflict in the announced withdrawal of police, possible provocations, incidents... The regime shows so much stubbornness and aggression that I have the impression that it would not shy away from deployment of violence. We will do everything to avoid that", he notes.

He adds that "everything the regime does is based on lies."

"They annulled the decisions of the Podgorica Assembly, even though the vast majority of Montenegrins of that time were in favor of joining the Kingdom of Serbs, Croats and Slovenes. They interpret it today as the disappearance of Montenegro, although they forget that Serbia then disappeared, or lost its name, not just Montenegro", Amfilohije points out.

He also points out that the idea of unifying all Serbs and restoring the Patriarchate of Pec was the idea of King Nikola, while the Podgorica Assembly was a kind of expression of these aspirations.

"Nevertheless, they are making history today and changing the will of King Nikola. History gives me the right to call Milo Djukanovic a traitor to Montenegro, because he handed over Metohija, organically connected to Montenegro, to the Kosovo plunderer Hashim Thaci, who ashamed an extremely patriarchal and venerable Albanian people", Amfilohije said.

Asked if the announced dialogue between the Serbian Orthodox Church and the state would help calm the situation and eliminate the deficiencies in the law, Amfilohije says he received a letter from Prime Minister Dusko Markovic calling for dialogue, but on implementing the law, which, he notes, is unacceptable to the church.

"The current government is in favor of dialogue, but in a way that we should just perform the role of the executors of their idea of restoring Montenegro's identity. In fact, they see the Metropolitanate as some sort of sect of theirs that would fit into the newly introduced Montenegrin identity", Amfilohije concluded.

Asked if the government has the goodwill to resolve the crisis and find a solution, he estimates that it appears that it is not willing to do that, judging by their public reactions.

"I am under the impression that Prime Minister Markovic is a little bit more open and more inclined to agreement, while President (Milo) Djukanovic openly demonstrates the lack of any will to reach a compromise. He went as far as characterizing our liturgies as a 'crazy movement'. They compare us to Tehran, and they accuse us of turning Montenegro into an Orthodox mujahiriya. That's the goodwill we can hope for", he concludes.