The new President of Croatia is Zoran Milanovic, the results of the second round of Croatian presidential elections show. Milanovic holds victory speech 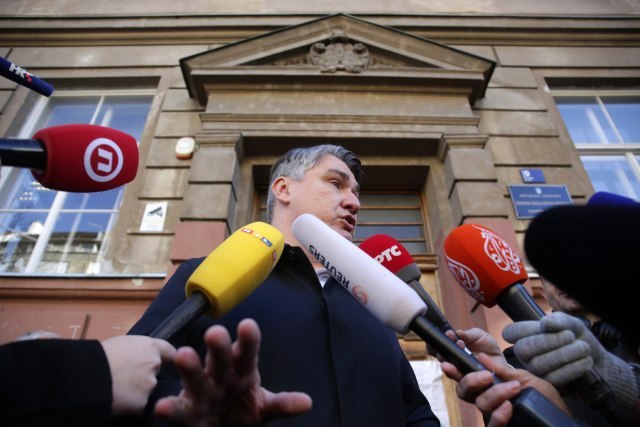 The first exit polls released after polling stations closed at 7pm indicated this result, given that Milanovic already had more than six percent advantage at the time.

"Dear friends, welcome to the victory factory, as I promised. Many thanks to those who supported me and to those who did not. I also want to thank Kolinda Grabar Kitarovic", Milanovic said, which was followed by the noise of disapproval, but Milanovic interrupted this and said: "No, no, I ask that it should not be done".

"If I pushed anyone too hard, if I told any falsehood, it was not intentional. I do work starting from today or tomorrow and live a job different from this now. Croatian citizens have elected me the President of Croatia, Croats and those who are not. I am happy about that. I was also the Prime Minister and this has been a burden for me over the past six months. The truth is in the eye of the beholder. There are those that are still not in my favor, but we must live with it. You will not listen to the sweet stories of fellowship from me, but I will try not to hurt anybody unnecessarily or intentionally", Milanovic said.

"Two million people voted in this election and once again, thank you all. Measure me from day one, I have never been a man of great promises. I have never been in the executive branch, and if anything, I will never say a known but unrealistic promise. But then I held the levers of power, now it's different. Some things may not have to be said and I felt it on my own skin. I used to do harm to people without being aware of it, I mean hurt their feelings. They know it was not intentional, but politics is such. I wish you to have a moderate and sober celebration, but no worries, this is not a prohibition announcement. Let's be unique in diversity, smile for smile, to work for the greater satisfaction of people in Croatia. If this tight but honest victory of mine had brought a little faith in this society, I am a happy man and I am rejoicing in it. Cheers!", Milanovic concluded.

The new President of Croatia was born in Zagreb in 1966 where he graduated with a law degree. He worked at the Ministry of Foreign and European Affairs in the 1990s, and after Ivica Racan's death in 2007, he was elected President of the SDP, Croatia's leading center-left party.

He led the center-left coalition government from late 2011 to early 2016. After losing parliamentary elections when he failed to form a government, he resigned as party president and devoted himself to private business.

He campaigned under the slogan "Normally, a president with character", emphasizing that he would fight injustice, violence, corruption, protect the weaker and human rights, and advocate for equality for all citizens.

Milanovic is due to assume his presidency on February 18th.

The incumbent, Kolinda Grabar-Kitarovic, officially took office on February 19, 2015. At that time, she defeated the left-wing coalition candidate, former President Ivo Josipovic, as the HDZ candidate in the polls with a slight difference in votes.