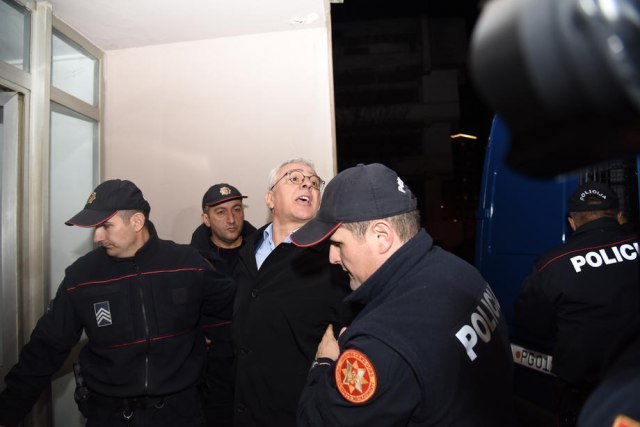 The prosecution had previously assigned the same measure to another MP of Democratic Front (DF), Milun Zogovic.

DNP leader Milan Knezevic is currently at the hearing, Podgorica based "Vijesti" reported. Mandic and Knezevic were arrested last night on suspicion of committing criminal offense of preventing an official from performing his official duties.

Zogovic was arrested on suspicion of committing the criminal offense of assaulting an official in the official duty, Montenegrin portal CDM reported.

He said keeping his colleagues for 72 hours meant that the institutions were not pursuing justice but revenge against the largest opposition bloc, Vijesti reported.

Montenegrin police detained all 18 members of the opposition Democratic Front and four others last night for opposing the adoption of the Law on Freedom of Confession in the Parliament of Montenegro.

Everyone except Mandic, Knezevic and Zogovic were released this morning.

State Attorney General Ivana Vuksanovic will also interrogate Milan Knezevic, who was detained alongside Zogovic and Mandic after taking his statement upon his being arrested last night - with other colleagues in the party.

Vucic: Serbia will always support its people in Montenegro

President Vucic also expressed his dissatisfaction with the arrest of MPs and leaders of the Democratic Front, who are also representatives of the Serbian people in Montenegro, according to a statement delivered to Tanjug tonight.

He, however, expressed hope that all issues could be resolved through dialogue, and stressed that Serbia would always support its people in Montenegro.

Radunovic briefed Vucic on the latest examples of the DF persecution following the arrest of all 17 MPs, which, he noted, is an unrecorded case in Europe, and since, for no reason, it has been completely unconstitutional, the custody of Andrija Mandic, Milan Knezevic and Milun Zogovic has been ordered, who began a hunger strike today.

Radunovic said that DF has shown so far that it is ready for all temptations and that it will not surrender in the fight for free Montenegro and that it will continue to resist the regime's intentions to seize SPC property and temples, the statement said.