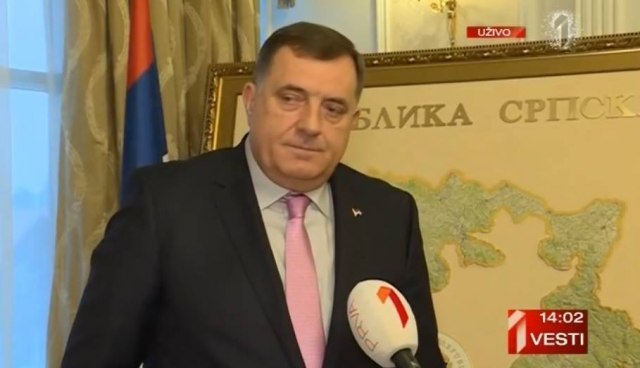 "I said nothing because I was informed that, on the order of the Prosecution, Mister (Davor) Dragicevic was to be brought in. I don't think that I, as a politician, should react," the chairman of the BiH Presidency said.

He added that what happened in Banja Luka's central square on Tuesday was not an arrest, but detention.

Dodik also said he was shocked because "some people brought the children there."

"This case in the end gained political elements, media attention is significant, and everyone has responded equally to this story - by blaming the RS (Serb Republic) authorities. I respect this pain and I understand everything, but the only place of pressure can be the Office of the Prosecutor," he stressed.

"It's a horrible story to lose a member of the family and I agree that this prosecutor will be removed from office. I am ready to accept prosecutors from America, Europe, Croatia, Serbia to deal with it," he said.

Dodik said that "people (protesters) had been gathering in the square without a legal framework" and that the image of "a policeman under attack" also went out into the world.

"A part of the media has already prepared the truth, I did not hear anyone reporting that rallies were being organized without permission for nine months now, the square has been taken away Banja Luka residents. The police did not behave as they wanted, it's all lies and speculations, no one's arm has been broken, nobody's been hospitalized," he said and pointed out:

"The police must not be beaten because then the state is being beaten. I, Milorad Dodik, will personally physically defend the police."

Asked what will happen tonight, considering that a gathering in Banja Luka was announced at 18:00 hours, Dodik said: "Democracy, what can we do."