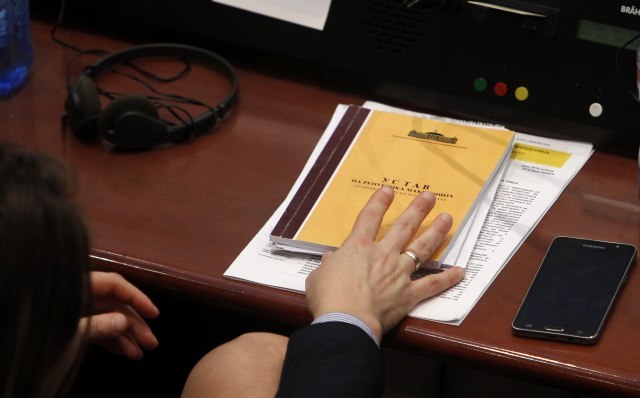 "Russia recognized the Republic of Macedonia under its constitutional name over 26 year ago and is not changing its position," the embassy tweeted - a message accompanied by a photographic combo of the flags of two states.

Macedonia's Assembly, "Sobranje" - at the proposal of the government of Prime Minister Zoran Zaev - decided late on October 19 in a two-thirds majority vote to support the motion for constitutional change under the Macedonia-Greece ("Prespa") agreement that would change the former's name to "The Republic of North Macedonia."

A referendum called to confirm the deal previously failed in late September due to a low turnout.

The implementation of the agreement is the condition of Athens to unblock Skopje's NATO and EU accession processes, stalled for many years due to the decades-long name dispute between the two nations.

The decision reached in the Macedonian Assembly late on Friday caused a storm of positive reactions in the United States and the EU, but also the dissatisfaction in the ranks of the largest and the most influential opposition party VRMO-DPMNE.

The decision was possible thanks to a number of opposition members of the Assembly ("deputies") switching sides during the preceding two days, and joining the ruling coalition to provide a two-thirds majority.

Some local media speculated that those opposition deputies who voted for the government's initiative received money in exchange. The fact remains that four VMRO-DMPNE deputies had been released from the house arrest, where they had been placed as suspects in the Assembly rioting of April 27 this year, when ethnic Albanian Talat Xhaferi was elected as president of this institution to much protest.

On Monday, the weekly Fokus is reporting said that some of those Macedonian deputies who voted to start changing the Constitution to implement the Prespa deal are now under 24-hour police protection, for their own safety.

The article said that they include not only the now former VRMO-DPMNE deputies - that were expelled from the party as soon as they voted in favor of the government's initiative on Friday - but also those from the ruling majority, and they they have all been received threats.

The vote was the first of three stages in the constitutional change process. The second phase will formalize the draft of the amendment, which requires a simple majority of 61 votes in the 120-seat Assembly.