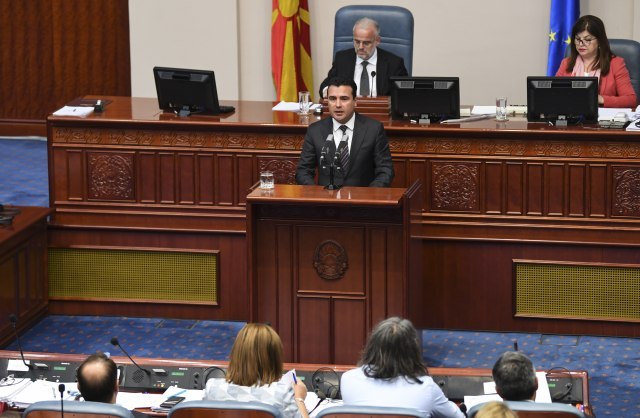 He has also offered the most influential opposition party, the VMRO-DPMNE, "amnesty."

Namely, Zaev told the opposition party that if they vote for constitutional changes in accordance with the Prespa Agreement (name deal with Greece that recently failed in a referendum) - they will receive "amnesty for their members who are in trial for unrest at the Assembly that took place on April 27, last year."

"Now is the moment to forgive. Let's forgive when it is most needed. We all know that the peak of divisions and hatred was on April 27. The bloody images of the deputies (Assembly members) went around the world. Here is a chance for forgiveness. Let's start from April 27. I know that everything has a price. I am ready to pay it. There is no future without forgiveness here in parliament," said Zaev, among other things, as he was addressing deputies on Monday.

He reiterated that there is "no better agreement than that reached with Greece on the new name of Macedonia and everyone knows it."

"Let us therefore use today's plenary session as an opportunity for reconciliation between the left and th right in Macedonia after last year's incidents in the legislative house," he said.

Zaev believes that today's decision, on accepting or rejecting the government's proposal to start constitutional changes involving the change of the constitutional name of Macedonia, is "a historic moment that will be told over and over by future Macedonian generations."

Zaev called on "all deputies to give each other a hand and accept the start of the constitutional review process in order to ensure Macedonia's Euro-Atlantic integration."