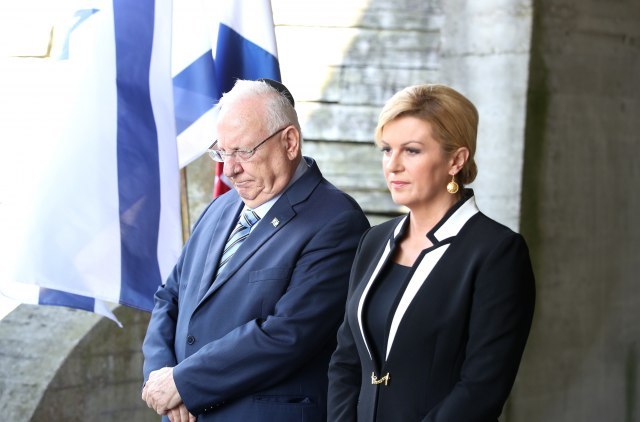 Rivlin and Kolinda Grabar-Kitarovic on Wednesday visited the grounds of the former death camp for Serbs, Jews, and Roma, that was set up and operated during the Second World War by the Ustasha regime of the Independent State of Croatia (NDH), a Nazi-allied entity.

The Israeli website ran the article under the headline, "Rivlin tells Croatia to 'deal' with its fascist past," the Croatia-based website Index is reporting on Friday.

The original article remarked that "Croatia’s current government has come under criticism in recent years for failing to tackle lingering intolerance and celebrations of Ustasha slogans and ideology."

Rivlin "urged Croatia to 'deal with its past' while paying respect to the victims of the Balkan country’s most brutal World War II death camp," the report, said, adding that Jasenovac is "known as 'Croatia's Auschwitz'," where Ustashas brutally murdered "tens of thousands of ethnic Serbs, Jews, Romas and anti-fascists."

"There are some who prefer to repress their past and see it as a 'black hole' which requires no study or soul searching. Croatia’s ability to deal with the past and not to ignore it is a moral obligation which is a fundamental part of any just society. It will continue to be an important element of the friendship between Croatia and Israel," Rivlin said, speaking in Hebrew.

According to the article, Grabar-Kitarovic said that "no political goal or regime can justify crimes committed in its name," and "pledged to continue to take care of the 'collective memory of the crimes committed here'."

The Times of Israel said that the number of people killed at Jasenovac remains disputed - "it varies from tens of thousands to 700,000, according to Serbian figures," while the site is described as "remaining a place of controversy."

Croatia's ethnic Serb and Jewish minorities have snubbed the official commemoration at the Jasenovac memorial for the past three years, accusing authorities of tolerating strains of pro-Nazi ideology in society, the report said, and added:

"They were particularly incensed by the placing of a plaque with an Ustasha slogan near the memorial in November 2016."

As for relations between Israel and Croatia - they "took a dip during the 1990s under president Franjo Tudjman" whom Israel "accused of failing to make a strong denunciation of the Ustasha regime, who murdered an estimated 75 percent of the country’s 40,000 Jews."

"The ties between the two countries have improved since Tudjman’s death in 2000," the article concluded.