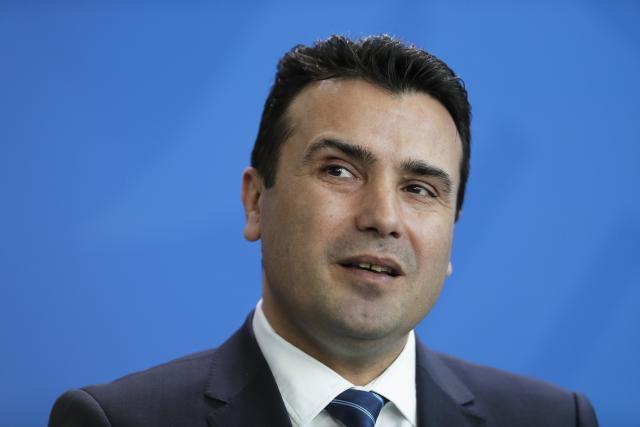 Zaev said jokingly that when it comes to possible territorial pretensions that Greece is warning about, "the only pretensions from Macedonia are directed towards the Greek beaches."

"Yes, we love to occupy the beautiful Greek beaches and islands each summer. More than a million Macedonians travel to Greece every year, we spend our money there, we love Greece, there are many contacts among businessmen and tourists. But honestly, there are no other occupationary intentions," said Zaev.

The interview with Zaev was conducted in Berlin a few hours after his meeting with German Chancellor Angel Merkel.

Asked whether the German government should participate more actively in the name dispute negotiations between Macedonia and Greece, Zaev said he thought that both sides need to be encouraged, but that pressure on either side is not the right path.

"No one can take away our independent and sovereign decision regarding the name," he said.

According to him, Macedonia's finds unacceptable the Greek demand to the change the Constitution (in order to confirm the change of the country's name), as well as the name of the state that will not be translated into English.

"This is our pride and our identity. I do not see any reason for the request to change the name in the Constitution, that is not dignified," the Macedonian prime minister said.

As he pointed out, "Greece needs a trusted partner, not a partner without dignity."

"The Constitution can change, but these changed can change again. The most important guarantee for Greece is that the solution to the name dispute be sustainable. This is done through international agreements, which will be ratified and will be valid in international organizations," he said.

The Macedonian prime minister said he cannot imagine that the negotiations with Greece might fail.

"I don't even want to think that there will be no solution to the name dispute, we have to solve this dispute, because only this way we can develop, integrate into the EU and become an advanced state with the rule of law. This is good for the entire region. Failure is unthinkable to Macedonia, to the whole region and to some extent to the EU as well," said Zaev.