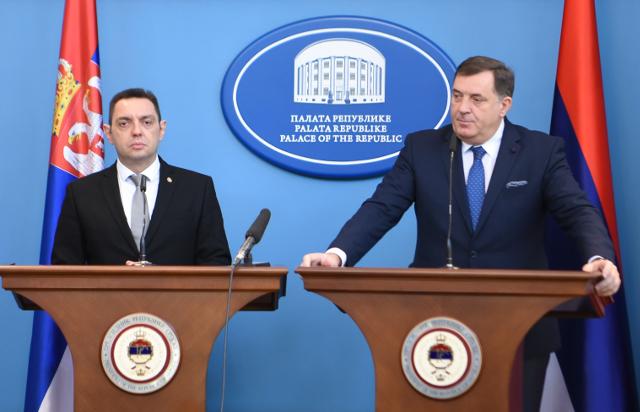 Dodik stressed that all RS representatives in BiH institutions will have to support this decision, given that the RS National Assembly recently adopted a declaration on military neutrality.

"I believe it will be so," he told journalists, Beta is reporting.

He pointed out that the RS does not want to have a border on the Drina River, i.e., with Serbia, that would also be a border "of some military alliances."

"The RS does not hide this and will follow Serbia on this issue," the president said.

"We have that right, no matter what some may say, because that is our position within BiH," Dodik said.

According to him, military neutrality suits the RS, as it cannot forgo the fact that NATO bombed the Serb people, and caused damage that is still being felt.

Addressing reporters, Aleksandar Vulin said that Serbia is committed to peace and stability, and stressed that it should be supported in this by all countries in the region.

He stressed that Serbia respects the territorial integrity and sovereignty of BiH, adding that Belgrade believes the RS "has its place, which cannot be diminished or jeopardized in any way by any subsequent interpretations of the Dayton Agreement."

"The state of Serbia is a guarantor of the Dayton Agreement and it must be unconditionally respected and implemented," Vulin said of the 1995 peace accord that ended the war in Bosnia.

He added that "everything that representatives of the two entities and the three peoples of Bosnia-Herzegovina agree on" is acceptable to Serbia.

Vulin also said that Serbia is trying and economically help the RS, and announced that the Ministry of Defense will significantly increase the scope of cooperation with the defense industry in the Serb entity.

Later on Thursday Vulin traveled to Sarajevo where he met with BiH Minister Marina Pendes. The Serbian minister said after the meeting that his country considers "a stable, strong, successful, and peaceful BiH that is developing" to be of "of highest interest."