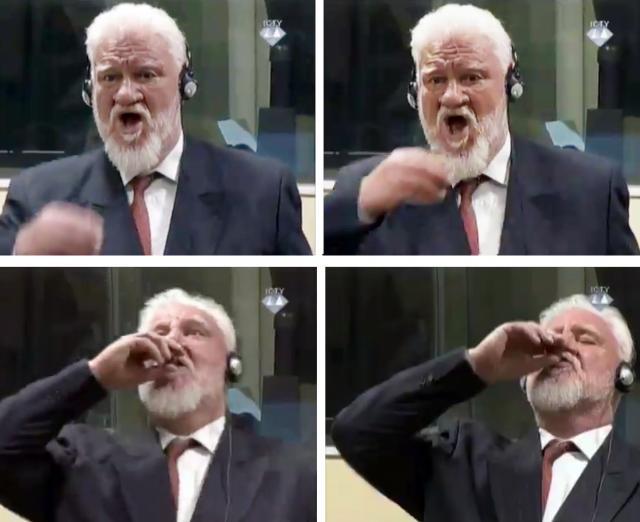 Croatian Prime Minister Andrej Plenkovic confirmed this during an extraordinary news conference, and offered his condolences to the family.

A spokesman for the ICTY, Nenad Golcevski, also confirmed the death, and said Dutch authorities had launched an independent investigation.

Praljak was among six former leaders of the wartime "Croat Republic of Herzeg-Bosnia (Herceg-Bosna)" - whose guilty verdicts were confirmed today by the Appeals Chamber.

The incident happened in the courtroom earlier on Wednesday, interrupting the reading of the judgment. Praljak said he was "not a war criminal," and after declaring that he "rejects the judgment" - appeared to be drinking something "from a small bottle."

His defense lawyer then said that Praljak had "taken poison." The judge called for a medical team and halted the proceedings. Several moments later the live broadcast from the courtroom was stopped.

Citing unofficial sources and family members, Croatian media reported earlier on Wednesday afternoon that Praljak - who during the war in Bosnia-Herzegovina in the 1990s headed the Main Staff of the Croat Council of Defense (HVO) - had died in the hospital.

Ahead of Plenkovic's news conference, the news agency of the Muslim-Croat entity in Bosnia-Herzegovina, Fena, said that Praljak was "stable."

It is unclear at this time how Praljak managed to smuggle the container allegedly containing the poison into the courtroom, considering that defendants are under special security measures.

Tanjug reported on Wednesday afternoon that the reading of the judgment resumed "without Praljak's presence."

Earlier in the day, the Hague Tribunal (ICTY) confirmed the existence of a joint criminal enterprise organized by Croats in Bosnia-Herzegovina in the 1990s.

A portion of Croatia's political leadership, with then Croatian President Franjo Tudjman at the helm, also took part, the tribunal's Appeals Chamber said, announcing its ruling in the Jadranko Prlic et al. case.

The chamber rejected the appeal lodged by the former Croat leaders in Bosnia-Herzegovina, and confirmed the original finding that a joint criminal enterprise was established by Franjo Tudjman and other political leaders with the aim of setting up an entity "in accordance with the old borders of Croatia," Tanjug is reporting today.

The chamber acquitted the defendants on charges of crimes committed against civilians in Mostar.

Carmel Agius, presiding judge of the Appellate Panel, who is also president of the ICTY, said that the chamber - with Judge Fausto Pocar's dissenting opinion - found that the destruction of the Old Bridge in Mostar was carried out for military purposes, rather than to intimidate and terrorize the civilian population, i.e., the Bosnian Muslims (Bosniaks).