The cross has been removed from the historical Sahat Kula (Tower), in the Montenegrin capital Podgorica, the Belgrade daily Vecernje Novosti is reporting. 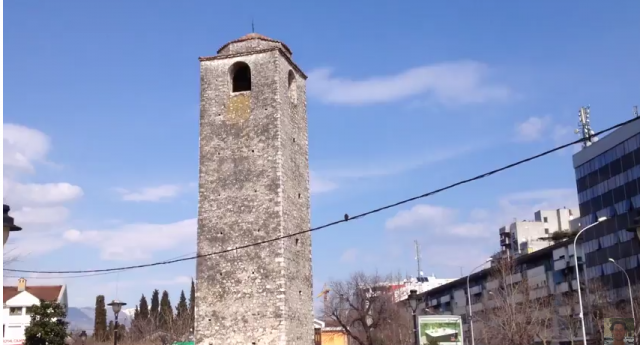 According to the article, before it was removed during the restoration of the tower and the adjacent Becir Beg Osmanagic Square, the Christian symbol was there for more than one hundred years.

The Serbian Orthodox Church's Metropolitanate of Montenegro and the Littoral reacted to this, describing the decision of the Podgorica authorities as scandalous. The Church also wants those who made the decision to be held responsible, and is demanding that the cross be returned to the tower as soon as possible.

The decisions concerning the restoration are made by the city, headed by Mayor Slavoljub Stijepanovic - while the project has been financed with one million euros by Turkey's TIKA agency.

Priest Predrag Scepanovic says the Metropolinate would have also condemned the removal from any structure of "the crescent, or any other markings used by our brothers the Muslims, or that of any other religious organization."

"I would have reacted a priest, as a man and as a Podogorica resident. The cross has been the symbol of the Sahat Kula for the past 100 years. It has been removed through the restoration, that is taking place far from the eyes of the public and of inquisitive observers and the lovers of culture and historical objects. This news has shocked us. If for one hundred years the cross bothered nobody, we are wondering why initiatives are now being launched to remove it, as a symbol of the majority Orthodox (Christian) population in Montenegro," said Scepanovic.

Another SPC dignitary, Dr. Velibor Dzomic, recalled that he and priest Mirceta Sljivancanin on April 12 had an official meeting with Deputy Mayor Calav Vesovic, after learning that the cross would be removed.

"Vesovic explicitly stressed and gave us his word, that the reconstruction must be done so that the structure and everything on it is preserved as found. I am now asking him to live up to his word," Dzomic said.

The Sahat Kula was built in 1667 and was used as a military fortification for a long time. After Podogrica's liberation from Turkish occupation that happened around 1890, a large metal cross was placed at the top of the 16-meter tall structure, and remained there until these last days.