Greek media have published a new video of a a fight that resulted in the death of a US tourist in Zakynthos. 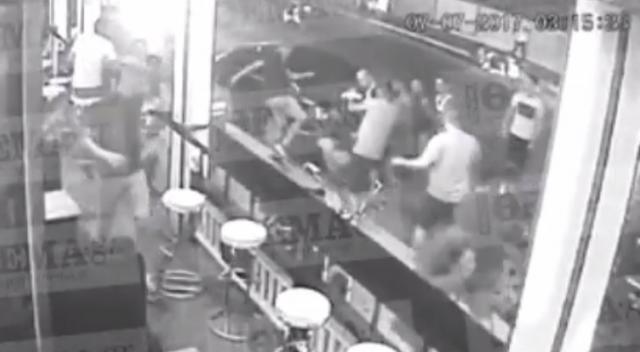 Nine people, among them seven Serbian citizens, have been arrested in connection with the incident.

The website protothema.gr on Wednesday published footage from a security camera installed in a cafe, through whose window the entire course of the fight can be seen.

After about ten seconds, the victim, Bakari Henderson, is seen running in, and being brought down by a young man. The American falls against a parked car, then a group of young men push him to the ground and kick him for ten seconds.

Soon, several young men stop the fight and push the others away.

The same newspaper also published a statement made by "the Serbian bouncer," who "broke his silence and said what happened."

"The club was crowded that night. A hostess, who was of Serbian origin, had a day off, but she came to the club where she was hanging out with Americans, among whom was the victim. She talked with them, joked and had a good time. At that moment there were also a lot of Serbs in the club, one of them approached the girl and said 'Why are you hanging out with Americans', in a threatening tone. The American verbally responded, and the Serb hit him in the face. Then the American took a bottle and hit the Serb in the head. Then everything started," the man told protothema.gr, and added:

"The girl began to separate them, and the victim struck her with his elbow by mistake, and she began to bleed. She came to seek my help and I ran in to split them up. Ashtrays started to fly, and the American came out of the bar and started to run, followed by the guys from the Serb crew, myself, and the Greek bartender. I remember hitting him with a fist in the face and two or three times on the body, but not on the head. When I left, the mass of Serbs continued to ruthlessly beat him all over his head and body. "

Earlier, Zora Dobricanin, the lawyer of one of the suspects, said that there was "a more favorable" video of the incident, and that she will insist on the process being conducted in the Serbian language.

"A colleague from Zakynthos told me there was a video and that it what can be seen is much more favorable than what is stated in the indictment. And that the video shows in details each action of each of the accused," Dobricanin said.

The detained Serbian citizens were visited in prison on Tuesday by Serbian Ambassador Dusan Spasojevic and Serbian consuls in Greece.

Serbian Minister of Justice Nela Kuburovic has told TV Pink that the Serbian authorities are in contact with the families of the suspects and are monitoring the situation.

She added that the Ministry of Justice will provide all necessary assistance.

"We must wait for the investigating judge to finish the job and see whether the proceedings will be initiated or not, and against whom, and then, as the ministry, we can come into effect and provide assistance under international agreements and our agreements with Greece," said Kuburovic

Additional footage, from inside the club where the brawl began, was also published on Wednesday: