Adviser at the Serbian embassy in Skopje and BIA officer Goran Zivaljevic was in the Assembly of Macedonia as it was stormed by violent protesters on April 27. 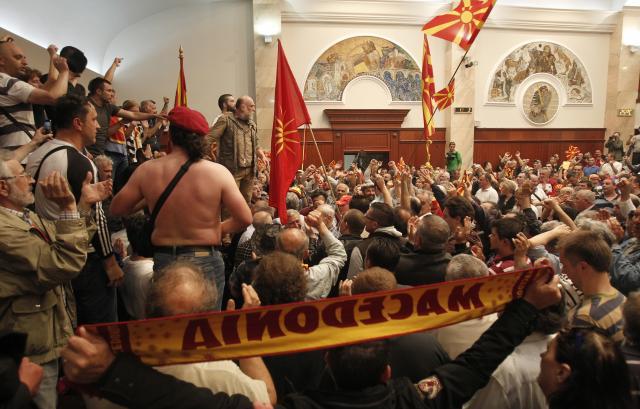 This has been reported by Macedonian television Telma.

According to a research team of TV Telma and daily Koha, Zivaljevic, former deputy director of the BIA, and now its active officer in the embassy in Skopje for a third term, entered the Assembly after 20:00 hours, together with a group of people in the crowd, and went to te plenary hall, where they were deputies of VMRO-DPMNE. According to sources of Telma and Koha, Zivaljevic had his picture taken there.

When asked what he was doing in the Assembly of Macedonia, outside the diplomatic protocol, Goran Zivaljevic told television Telma that he was in parliament on official building, to see whether the incidents persons from Serbia, fans or extremists, were involved in the incident.

The research of Thelma and Koha states that Zivaljevic is known to the regional public thanks to a number of controversial events.

His wife Olivera Antonic, it is added, testified about the murder of journalist Slavko Curuvija. At the time she was working in the State Security Service in the department for wiretapping and making minutes of conversations from the apartment of Curuvija after his murder.

There are indications that Zivaljevic took part in organizing a meeting in June last year in Moscow, attended by President of the Democratic Party of Serbs in Macedonia Ivan Stojiljkovic, as a signatory of the Russian regional initiative for the establishment of a militarily neutral territory in the Balkans.

Before arriving to the diplomatic mission in Skopje Goran Zivaljevic was a diplomat in Croatia in 2014, but the intelligence service there complained to Serbian colleagues about his work, after which he left Croatia, said TV Telma.

It is added that so far there has been no reaction from the Ministry of Foreign Affairs of Macedonia on whether measures had been taken against the Serbian intelligence officer because of his presence in the Assembly of Macedonia on April 27.