The newly elected Macedonian Assembly President Talat Xhaferi has received the keys to the cabinet where the seals for certification of documents are located. 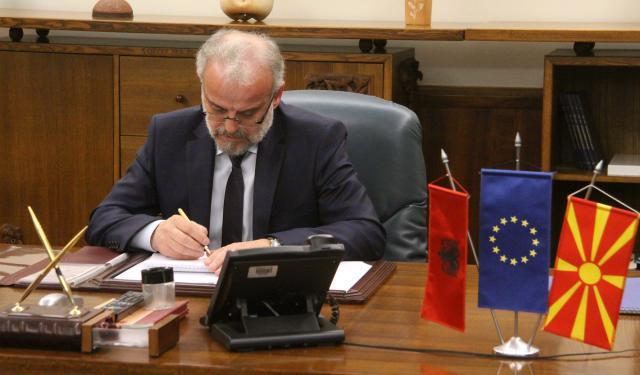 The new president of the parliament in Skopje can therefore officially take office and inform President Gjorge Ivanov that there is a new majority in parliament.

Immediately after entering the cabinet, Xhaferi held a meeting with Slovenian diplomat Samuel Zbogar, who is EU's special representative in Macedonia.

According to the website MKD.mk, Xhaferi's predecessor Trajko Veljanoski yesterday evening emptied the office, expecting the appointment of Xhaferi be published today in the Official Gazette.

Xhaferi said on Tuesday that it no longer mattered that his predecessors do not recognize his election to the position, as he and a new majority have the support of relevant organizations, the US, the EU, and other democratic states.

Xhaferi said that he faced "many similar challenges" before and that after everything that happened, there was the need to demonstrate "courage and composure."

Xhaferi, an ethnic Albanian from the DUI party, displayed two Albanian table flags in his cabinet today - one on his desk, alongside the flags of the EU and Macedonia, and another next to a large painting.

Tanjug is reporting that "some Macedonian media" said this "clearly shows his intentions."

According to the Skopje-based Telegraf, when Xhaferi met with Zbogar earlier in the day, only the flags of the EU and Macedonia were seen in his office.