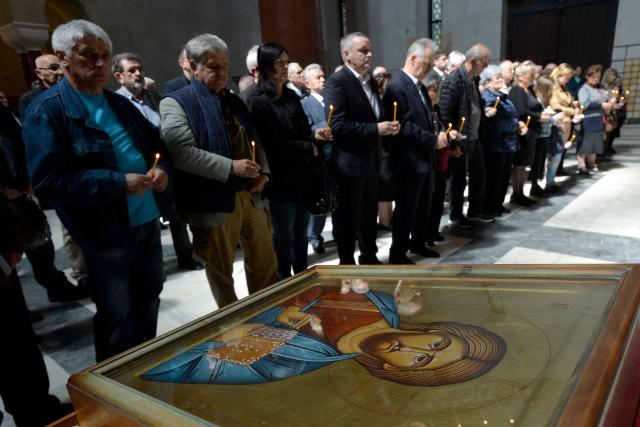 The memorial service in Belgrade (Tanjug)

During the subsequent two days in May 1995, 283 ethnic Serbs were either killed or went missing, including 55 women and 11 children.

Out of the total number, the fate of 127 victims has so far been determined, while 156 remain listed as missing - 65 of them civilians, including 27 women.

Croatians collected the bodies of the victims after the operation and buried them in graves mostly marked as "unknown."

Over the past five years, the remains of 145 people have been exhumed from mass and individual graves, 86 of whom have been identified.

According to the Documentation and Information Center Veritas, some 1,450 members of the Serb Army of Krajina were captured, mostly with the help of UN protective forces.

Croatian courts later sentenced a large number of these prisoners to many years in jail, several dozen of whom in the notorious Lora prison in Split.

Veritas representatives pointed out that Croatian generals Petar Stipetic, Luka Dzanko, Marijan Marekovic, Mladen Kruljac, and Stjepan Gasljevic - who acted on the orders of Croatian President Franjo Tudjman, and Gojko Susak, Janko Bobetko, and Imre Agotic - planned and carried out the operation, but have never been held accountable.

Veritas Director Savo Strbac stressed that Croatia has never been sanctioned for attacking a UN-protected area, nor has anyone been punished for bombarding Serb civilians in Western Slavonia in May 1995.

However, he noted, the international judiciary has punished Serbs for the moves they made in order to defend the area.

Of the 15,000 Serbs driven out of their homes in Western Slavonia, about 1,500 have returned, mostly elderly people, while other refugees remain in Serbia and in the Serb Republic.

The anniversary was marked in Belgrade today with a memorial service held at the Church of St. Mark.

In Croatia, the anniversary of the operation, that is interpreted as the liberation of Western Slavonia, this year took place in the shadow of the crisis of the Croatian government, and without any mention of the Serb victims.

Speaking during a ceremony in Okucani, Croatian President Kolinda Grabar-Kitarovic said that Operation Flash "announced and lead to" what she referred to as "the crown of all operations - Storm."