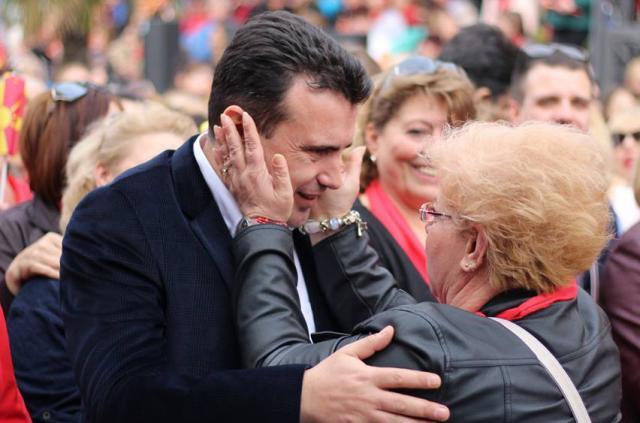 He told the Belgrade based daily Danas in an interview that these "lies were made up in order to cause a quarrel with the friendly Serbian people."

"Serbia is not only our neighbor, but a brotherly nation with which we share the past, culture, tradition, history and a common future in European integrations. We have good relations with the official authorities in Serbia and I not only do I not expect, but I as prime minister I will be advocating to advance cooperation at all levels," Zaev said.

Speaking of the disputed "Tirana declaration" - based on which he struck a coalition deal with several ethnic Albanian parties, and the reason stated by the Macedonian president when he refused to give him the mandate to form a government - he said it provides for greater use of national minority languages ​​- Albanian, Turkish, Serbian, Roma - "wherever and as much as possible according to the Constitution and the laws, because all citizens of the Republic of Macedonia win in this way, while Macedonians lose nothing."

"The program of the new government does not provide for changing the anthem, the coat of arms, the flag, condemnation of other nations for some kind of genocide, as they have been lying in order for us to quarrel with our friendly Serbian people, it is not envisaged to change the constitutional name of Macedonia. And there is no separatism. We are all together, Macedonians, Albanians, Turks, Serbs, Vlachs, Roma, Bosniaks," said Zaev.

In addition, the SDSM leader said that "a new parliamentary majority has been established in Macedonia, while acting President Gjorge Ivanov must not interfere with the democratic process."

Zaev also said that any compromise between him and VMRO-DMPNE party leader Nikola Gruevski was "not possible."