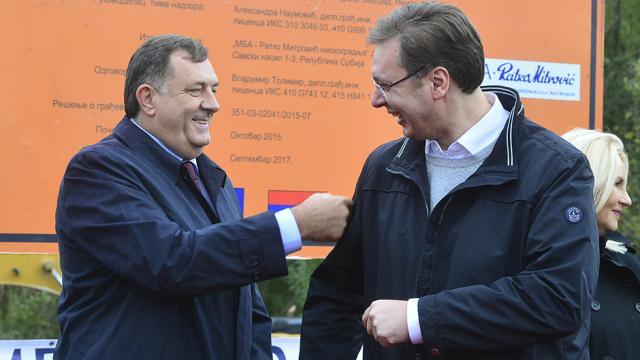 Mektic - minister of Security of Bosnia-Herzegovina and a member of the SDS, an opposition party in the Serb Republic (RS) - added that the meeting "only took place because Vucic took pity on Dodik."

"Dodik begged and pleaded with Vucic to come for days, but he wouldn't. He came in passing, he made no statements, and he flew out immediately, while Dodik then slyly held a news conference where he said they spoke about the problems in Bosnia-Herzegovina and how Serbia can help solve them, that he informed him about the construction of the Kasindol university and hospital, that they exchanged opinions about ways to create jobs - and all this in 16 minutes. In the end Vucic informed him about the summit (of regional PMs). Dodik is a persona non grata in Serbia," said Mektic, as quoted by the Bosnia-based website klix.ba.

The Serbian government earlier announced on its website that Vucic and Dodik met on Thursday in East Sarajevo, at the Administrative Center of the RS, after the summit of prime ministers of the Western Balkans held in Sarajevo in the framework of the Berlin Process.

The website also said that Mektic "stressed that Vucic on Thursday sent a key message that the fate of Serbs in Serbia and in the Rs depends on reconciliation and coexistence between Serbs and Bosniaks (Bosnian Muslims) and that it is very important to work on it in order to secure a future."

"I would tell all Serbs, Bosniaks, Croats and everyone else not to pay attention to any nonsense, yelling, noise and song of some individuals, but to be creating that reconciliation everywhere. We must start forgiving each other, not forgetting because the truth should be nourished and inherited, but a future based on trust should be built," he said.

Lastly, the website reported, Mektic declared Dodik's career "finished," and said the leader of the Serb entity in Bosnia-Herzegovina "should come to terms with that as the main culprit for the financial ruin and poverty of the RS."