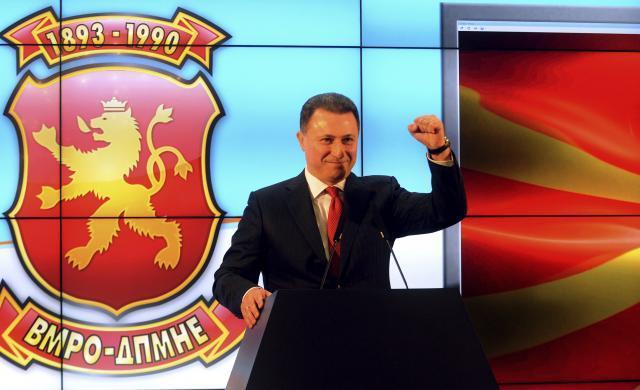 According to the MIA agency, former Macedonian PM Gruevski, the leader of the VMRO-DPMNE party, thinks the platform in question "could fundamentally change Macedonia and lead to divisions along ethnic lines."

Gruevski was a guest on a local TV station when he said he told Zoran Zaev, the leader of the SDSM, that he could count on VMRO-DPMNE's 51 votes in parliament if he decides not to implement the Albanian parties' platform.

"We are ready to support the SDSM to form a minority government if they give up on the law on languages, the Tirana Platform, and the proposal to redefine and degrade Macedonia. If Zaev wants to be prime minister so much, we'll let him implement his program, for as long as it isn't jeopardizing state and national interests. He can attack us if he wants, but not the state," said Gruevski.

He added that if Zaev asks, he would "voluntarily surrender, be arrested, incarcerated, maltreated" - while the VMRO-DPMNE would continue to support a minority government, "until the next election, which we can agree even now."

"Let him attack me, but stop attacking the state. He (Zaev) can consider this an open offer," the former Macedonian prime minister said.

The Tirana Platform agreed by ethnic Albanian parties in Macedonia and Albanian Prime Minister Edi Rama, seeks to, among other things, give Albanian the status of an official language in Macedonia.

According to Gruevski, a draft law that would implement this would represent only the first step in a series that would lead to Macedonia's division along ethnic lines - "through cantons or federal units."

"The authors of this scenario are trying to install Zaev in Macedonia, weaken the country and change its name and the Macedonians' identity. That is the goal of those who launched the campaign to remove VMRO-DPMNE from power. That process can lead to the loss of our state," Gruevski said, calling on people to "activate" against such a scenario.

According to media in Macedonia, Zoran Zaev has informed the main committee of his party about the agreement he reached with ethnic Albanian parties to form a coalition government, that, among other points, envisages accusing Serbia of allegedly committing "genocide" against Albanians in Macedonia between 1912 and 1956.

The republika.mk website is reporting that the main committee "did not accept this decision benevolently," and that Zaev tried to play it down by saying it would not be dangerous to Macedonians - because the blame would be put on Serbs and the Serbian government, which was at the time "in charge" of what was then Vardar (Vardarska) Macedonia.

When confronted with criticism from several members of the SDSM main committee, Zaev reportedly present the argument that "there would be more Albanians had they not been killed, and they would have been in the Constitution as a constitutive people."

According to the website, Zaev "effectively changed the history of Macedonia by claiming that Albanians were always present there in large numbers, but are fewer now due to being exterminated."

But the SDSM denied the veracity of this, saying that the reports about the plans to change the state flag and the national anthem, "some kind of condemnation of nations for genocide," and language solutions contrary to the Constitution were all "false."

The party also accused VMRO-DPMNE and the media they control of being behind this, and said the rival party was doing this "afraid of losing privileges and being held responsible for crimes once a new coalition (made up of SDSM and Albanian parties) comes to power."