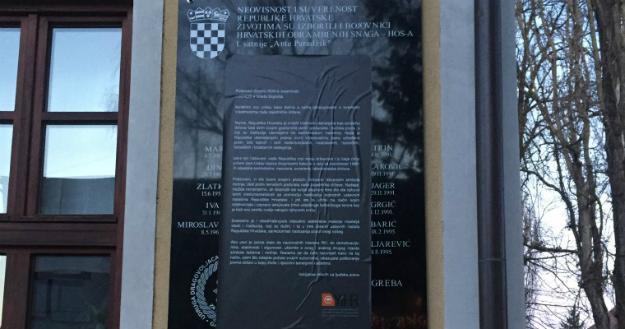 The plaque was installed recently in front of a kindergarten in this town, by HOS Jasenovac and UDHOS Zagreb - two associations gathering Croatian veterans from the 1990s war.

The inscription includes the slogan "For home - ready" - a greeting used by the Ustasha regime of the Independent State of Croatia (NDH), a Nazi-allied WW2 entity that operated death camps for Serbs, Jews, and Roma, including in Jasenovac.

The Croatian website Index is reporting on Thursday that the activists put a message of their own across the plaque "during the morning," and that it said they acted in order to defend "the fundamental principles of the Republic of Croatia" - and considering that "adequate reaction from the institutions of government was missing."

The Initiative noted that the Constitutional Court of Croatia had determined that the greeting "For home - ready" represents a manifestation of a racist ideology, and glorification of the fascist NDH regime.

"Considering that the government of (Croatian PM) Mr. Andrej Plenkovic has so far not undertaken any significant actions, nor has it shown even a minimum of political courage in protecting the fundamental principles of the Republic of Croatia, the Initiative has covered the plaque, without damaging it, with a letter to the members of the associations who installed it," the group said.

The letter in questions speaks about "fundamental values, human rights, and democratic principles" but also stresses that the plaque represents "a symbol of hatred that stands against the state's postulates."

"You have used your dead to promote tendencies contrary to Croatia's constitutional principles. In addition, you did it in a way that relativizes and in fact ridicules the victims of the Ustasha, fascist terror, that soaked precisely this land with their blood," the letter said.

On Thursday afternoon, the Initiative announced that its activists were brought in for questioning by the police, and that the case will be forwarded to Croatia's Public Prosecution.

"It's possible we will be charged for committing a punishable offense," a statement said, noting that they were unclear what the offense might be.

Their "letter," placed over the controversial inscription, has in the meantime been removed.