The Serb Republic (RS) on Sunday held the first referendum in Bosnia-Herzegovina after the Dayton peace agreement. 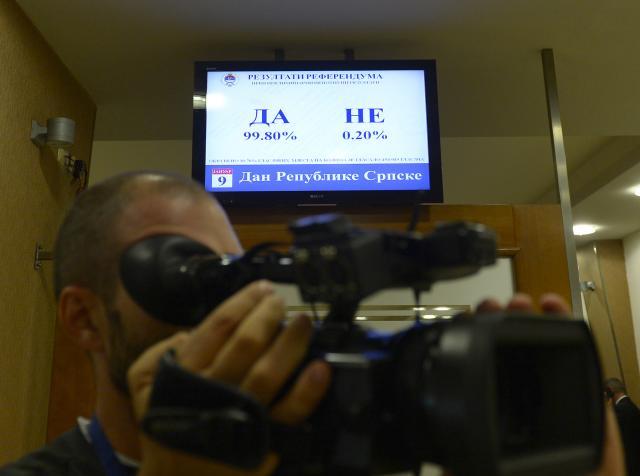 Citizens in the Serb entity overwhelmingly voted "yes" to continue to mark January 9 as RS Day.

The final results will be sent to the National Assembly for adoption, and then published in the Official Gazette.

Officials in the RS said earlier they were satisfied that the voting went peacefully, while RS President Milorad Dodik said the referendum would become historic, and was not designed to endanger anyone.

Dodik said it was instead a legal right of the RS and stressed he was especially proud of the fact the voting went without incidents, as the Serb people "showed political maturity and determination."

RS Prime Minister Zeljka Cvijanovic that those who cannot identify with January 9 as the Republic Day, "will be under no obligation to celebrate it."

"Several steps await us, including legislative activity that we said will most likely go in the direction of changing the law itself, which means removing the obligation when it comes to celebrating the Republic Day," she said.

As RS citizens were voting, the media in the other entity, the Muslim-Croat Federation of Bosnia-Herzegovina (FBiH) was reporting about "an unconstitutional vote that will change nothing in the state."

Bakir Izetbegovic, who currently chairs the tripartite Presidency of Bosnia-Herzegovina, said the referendum represented "an escalation of the entity President Dodik's self-will."

The voting took place amid the raised tensions between Banja Luka and Sarajevo, considering that the referendum was prompted by the Constitutional Court of Bosnia-Herzegovina ruling that marking RS day on January 9 was unconstitutional. This decision was not accepted by the RS leadership.

Few political issues since the signing of the Dayton peace accord, that ended the war in Bosnia-Herzegovina, have produced tensions on a scale similar to that caused by Banja Luka's decision to hold this referendum.