The governments of Serbia and the RS on Friday together marked the anniversary of the start of the Ustasha crimes committed in the NDH. 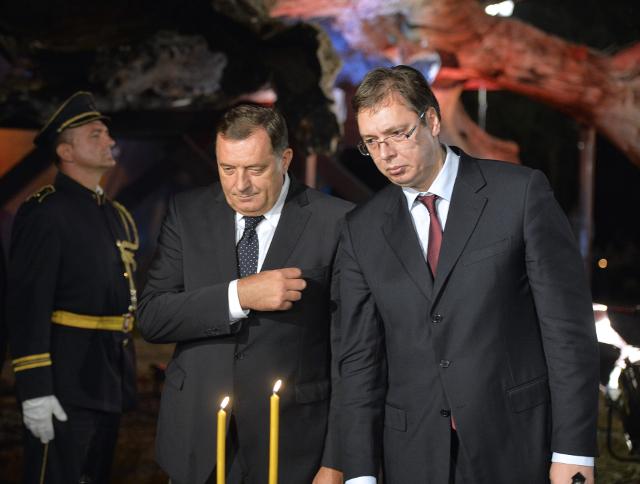 The event was held at the Memorial Area Donja Gradina to mark 75 years since the beginning of the genocide against Serbs, Jews and Roma in the death camp Jasenovac, the Serbian government announced on its website.

Donja Gradina is located on the right bank of the Sava River and is now in the Serb Republic (RS) - the Serb entity of Bosnia-Herzegovina. During the Second World War, it was controlled by the Nazi-allied Independent State of Croatia (NDH), whose Ustasha regime operated the death camps.

In his address, Vucic said that Serbia wants peace but will never allow the pogrom against its people.

The institutions of the Republic of Serbia and the RS must determine the exact names of the killed Serbs in the territory of the Independent State of Croatia (NDH), since even after more than 70 years those facts remain undetermined.

He said that we have to do it also because of the awakening of the Ustasha policy in Croatia.

"We will never allow Jasenovac, Jadovno, Jastrebarsko, nor Operation Storm," he said, and added that "too many lives were lost for us to be afraid of butchers and murderers that are promoted by some as heroes."

Milorad Dodik said the commemorative ceremony that it was necessary that everyone in Bosnia-Herzegovina faced the truth of the previous war, and move to the future at last.

Dodik added that many Serbian victims and their descendants were not given closure in the last war, because many criminals had walked free, and some held top-ranking state offices.

The president said that the RS was created as an institutional form of protection for the people that had been the victims of genocide in World War Two for the first time.

The commemoration was attended by representatives of the two governments, the Serbian National Assembly, the RS Assembly, and other state organs, the Serbian Orthodox Church, the Alliance of Jewish Communities, the Roma national minority, and other associations and citizens.

The Independent State of Croatia's system of concentration camps, headquartered in Jasenovac, was established on August 21, 1941. Around 700,000 people were killed there, mostly Serbs, Jews, and Roma.