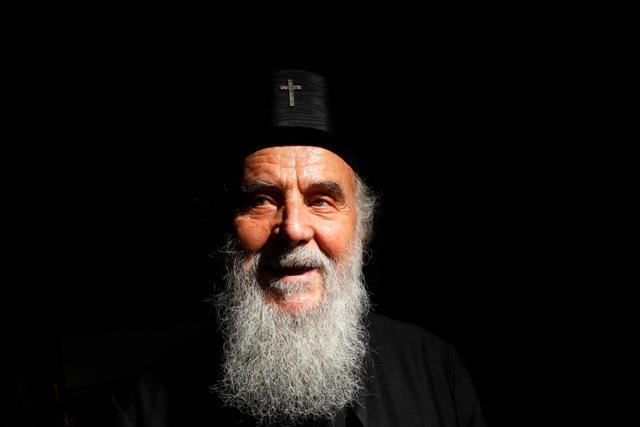 This is according to a report in Croatian daily Jutarnji List, which continued:

Patriarch Irinej was in Croatia with other bishops, while for the first time in history a session of the Holy Synod was held in Monastery Jasenovac.

The central event of the visit of representatives of the SPC to Croatia was the burial of four Pakrac bishops in the Cathedral Temple of the Holy Trinity in Pakrac. Along with many believers Croatian Culture Minister Zlatko Hasanbegovic, as a special envoy of President Kolinda Grabar Kitarovic, Milorad Pupovac, president of the Serbian National Council, Veljko Dzakula, president of the Serbian Democratic Forum and many other officials were in attendance.

"Many Christians lost their awareness and minds and all those who have the burden of war crimes need to seek forgiveness from God. We are all icons of God, we are all children of God. Serbs in these areas experienced a terrible tragedy, their sacrifice should not be forgotten, but we have to forgive, that all that happened here, never happens again," said Patriarch Irinej.

Patriarch Irinej spoke to believers also in Jasenovac, where he recalled the killed victims and called for the return of Serbs to this region. As it was said, there are only 11 Orthodox believers in the Jasenovac parish. The patriarch also commented on the cases of physical attacks on the members of the Serb minority in Croatia in recent days.

"We thought that what happened here, that this was behind us. Unfortunately, the yeast of those events seem to have remained to this day, to some extent," said the patriarch.

Croatia's minister of culture welcomed Patriarch Irinej and other members of the Holy Synod in his own name but also on behalf of Grabar Kitarovic stressing that despite the many adversities in history, Christianity seeks to spread peace and promote trust.

"True peace and reconciliation is not passively tolerating, but working on a shared future through cooperation and friendship for the sake of the future and the community. This imposes a common priority, as our mission and goal is to preserve people and renew life in these areas, which my ministry is doing also symbolically by renewing the seat of the Slavonia eparchy, the church and the parish house in Pakrac," said Hasanbegovic, adding that, although he is a Muslim, he was very glad about the meeting Pope Francis and the Moscow Patriarch Kirill, which was "a sign of hope and renewal of our overall relations."

Patriarch Irinej thanked him for coming by saying "we, Serbs, have nobody closer than you Croats," adding that "what happened between peoples must be a warning," and calling for "cooperation for a better future."

In addition to the session of the Holy Synod in Jasenovac, an informational session of the Synod with the Committee for Jasenovac was held, headed by Bishop Jovan. The main decision of this committee was to extend its activities to the whole of the Second World War.