Vučić: We know what happened in Kosovo and Metohija, we'll wait for the report VIDEO

Serbian President Aleksandar Vučić addresses the public from Tirana, where he participates in the Summit of the European Union and the Western Balkans' leaders. 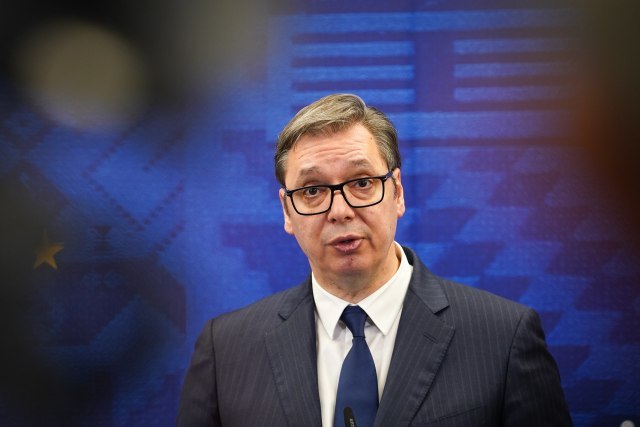 Serbian President Aleksandar Vučić addresses the public from Tirana, where he is participating in the Summit of the leaders of the European Union and the Western Balkans.

Vučić said that Serbia is an independent country, but that it also knows its obligations towards the European Union. He said that he was there to defend the positions of Serbia.

"I am very satisfied with the open conversation in Tirana regarding the relations between the Western Balkans and the EU. We talked about concrete things, about support for Serbia, related to the energy sector, roaming, but also strategic issues and everything that lies ahead," said President Vučić.

"Today again, contrary to the Brussels Agreement, armed police officers were sent to the North. As I said yesterday, you just wonder which day some new provocation will happen that can disrupt stability and peace. It is good that, at least according to the current data, there are no casualties, we believe that it will remain so. As for the timing, we do not know what is in the minds of those people who want to cause conflicts every week. It is not an easy period ahead of us, but it is important that we stay with our people and that we make agreement with the Albanians on everything it is possible for peace to be maintained and preserved. I also believe that Miroslav Lajčak will play an important role in calming the situation down."

"Anyone who is not in favor of recognizing the independence of Kosovo yesterday is a man from the past, I guess for the future they are the ones who should do everything they want. The usual narrative. This comes as the nicest part of the story", said Vučić when asked about Osmani.

Interruption of broadcasting of Nova S and N1

"No one blacked out the channels for them, they did it themselves. If they say they have problems with freedom, it's a serious problem of the owner who doesn't allow them, because they don't fight for you. Why today - I can't explain to you how much it was an important topic and how much someone was shaken. I agree that media freedom should be discussed, especially in those media," said Vučić.

"We are ready to talk. We have made it clear what our red lines are and what we cannot accept. We will continue negotiations," said the president.

"The problem is not that we meet, but whether we can come to any kind of solution," said Vučić about the continuation of the dialogue with Kurti.

"We decide on our future, not someone else. When you expect a meeting with Albin Kurti, what will happen if you reject this new Franco-German document? Do you have a new plan to offer, does it exist... There is no doubt that we will work seriously in the future to reach a compromise solution. The real question is not when and where I will meet with Kurti, I will do it when they propose to us from the EU. But the real question is the content of those talks and solutions, because we are getting various messages from various sides."

"We should refrain from unilateral moves and actions, because it can harm us and we must not allow ourselves, we must be the guarantor of peace and stability in the region. It cannot have a time frame, it is frivolous, it means that you have to solve in three months something you haven't solved in 100 years... It is frivolous and irresponsible. We are not able to agree in 10 years to implement CSM. They don't write deadlines, because they are wise and they are aware that it's impossible. It's important to talk, to save people's lives, that our economy moves forward and how and in what way we can change Serbia."

"There is no doubt that in the future we will work seriously to reach a compromise solution. The real question is not when and where I will meet Kurti - I will do it when they propose to us from the EU. The real question is what will be the content of that compromise solution. We are receiving various messages from different sides about the content of it. We have a pro-Albanian, pro-Serbian side, that it was made of the teams of the French and German presidents. We made in advance some statement that we were supposed to deliver to the press, but we didn't do it. I can't say that I'm 100 percent against it or for it, we have to discuss that document and then we will see. We have to talk to each other, we have to refrain from unilateral actions, this is something that can harm the whole process, this is something that we cannot allow. We have to be guarantor of peace and stability in the region," said Vučić.

The president pointed out that there cannot be a time frame.

"There can't be any deadlines, you also heard Borrell today. How unreasonable it is that there is a time frame. To solve in three months something that we could not solve for 100 years and more. And if we don't solve it within 3 months, then what? Then we are writing amendments to St. Peter so that he extends the deadline by another three months. This is frivolous and irresponsible. When you hear that someone insists on deadlines for something, and we are unable to implement the CSM for 10 years, because one party does not want it... The Community of Serbian Municipalities must be implemented, so let's talk about something else. So what are the deadlines? Of course, it is not written, because people are wise enough and they are aware that it is impossible. But we have to find compromise solutions, in order to save the lives of both Serbs and Albanians, to save people's lives, our economy, so we could move forward. I think today's meeting was beneficial and healing in that regard," said Vučić.

"Now it's calm and I'm waiting for the report from our hospital center in Mitrovica. According to the Brussels agreement, Kosovo police officers cannot enter the north without the consent of four mayors. None of the four mayors were consulted on this," said Vučić.