Brnabić: The ultimate goal is to expel Serbs VIDEO 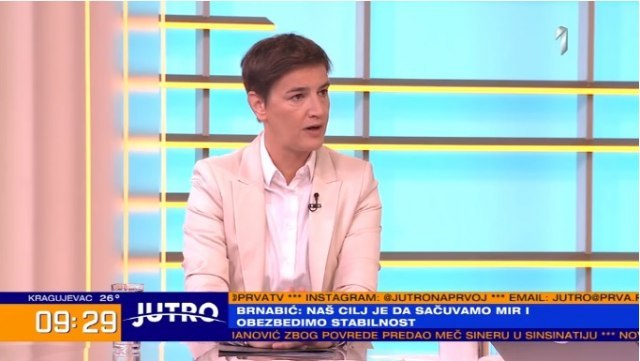 Serbian Prime Minister Ana Brnabić told TV Prva that Serbia's goal is to preserve peace and ensure stability. That is, in essence, the main and most difficult task for us today in Brussels.

"I really think that peace is being discussed today in Brussels and that topics that are on the agenda, such as license plates and identity cards, the essence of which is that Kurti is constantly provoking, to prevent what was being prepared on July 31 - a physical attack and expulsion of Serbs," she said.

When asked if KFOR is a guarantor for the safety of Serbs, she says that it certainly is, but that Serbia does not want it to be that way.

Today's meetings in Brussels are very difficult and I am constantly thinking about the President of Serbia, the Prime Minister pointed out and underlined that the ultimate goal of Kosovo Prime Minister Albin Kurti is the expulsion of all Serbs.

"Serbia is going to Brussels with a clear agenda, which is to preserve peace and stability, to remain in the position of international law and principles of international law, military neutrality, as the President of Serbia clearly said yesterday at the NATO headquarters," Brnabić said.

Asked what response we should expect from Brussels, she says she doesn't know.

"I don't know, if we are talking about NATO, the Serbs in Kosovo and Metohija, especially in the north, want the presence of KFOR. Now things have changed a lot, since the bombing of the FRY and the Kumanovo Agreement when the Albanians wanted NATO, they don't want it now, but the Serbs want it because they see that KFOR is safeguarding Albanians," says the Prime Minister of Serbia.

On the other hand, she adds, it speaks volumes about the intentions of Albanian politicians. "And in that sense, it is good that NATO is our ally", she believes.