Rakić: Ambassadors of the Quint told us to accept the independence of Kosovo VIDEO

Head of Office for KiM, Petar Petković, President of Serbian List Goran Rakić and four mayors from the north of Kosovo and Metohija address the Serbian public. 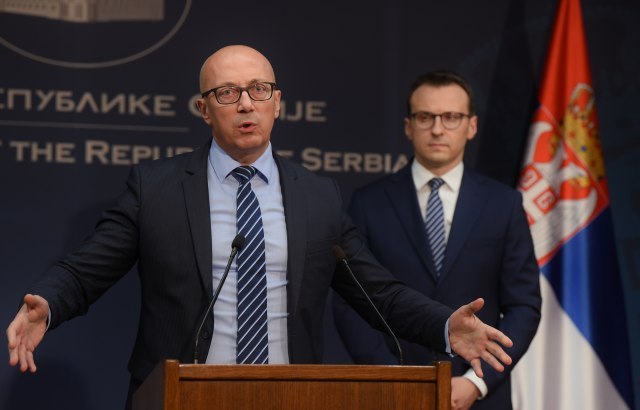 He states that they agreed that the session would not be open to the public, but due to the weight and seriousness of the message they received, they have a moral, human and political responsibility to explain and inform the people and the public what was discussed at that meeting, which lasted more than two hours.

"Their countries support Kosovo's independence, that is why they, as representatives of the countries they come from, support independence, they absolutely support the decisions that Pristina makes, and in particular they underlined and emphasized that they support Pristina's decisions on license plates and the introduction of some kind of entry-exit document ", he said and added that they refer to the fact that Pristina did it in accordance with some agreement.

He also stated that it is heard that those who live in Kosovo and Metohija will be issued a document that will allow them to stay in Kosovo and Metohija for 90 days. "My child has to cross the border, i.e. an administrative crossing every 90 days. Now we have to accept that we are foreigners there. Our fathers, grandfathers... some of us want to become foreigners, or to assimilate us. Or to expel us from our centuries-old hearths", Rakić said.

He added that the mayors stated that it was not in accordance with the agreement, but that the ambassadors said that they should "accept the reality on the ground" and the independence of Kosovo.

"We looked at Brussels and our President Vučić, for us, it is not over," he said, adding that the only instance where open issues are resolved is dialogue. "We do not recognize unilateral decisions. The only thing they believe is that a solution will be found in Brussels, for us who live down there."

As he stated, he expects that through the dialogue in Brussels, Vučić and his team will find a way to overcome the crisis, because this will not last a few days or weeks, it will now be a year since the protests started.

"They can support and make decisions in their favor, but for us it is unacceptable. The only relevant thing is the Brussels table. When we have unilateral moves, we have a reaction from the Serbs. Acquired rights cannot be taken except by force. They have force, they have laws, they can pass some laws by force. We will not accept that they take our license plates. They call KM plates Milošević's plates. That is not true, those are Serbian license plates," Rakić concluded.