Vučić: "Why would we care about the Constitution of the so-called Kosovo?"

President of Serbia attended the display of newly produced weapons and military equipment from the domestic industry, for the needs of the Serbian Armed Forces. 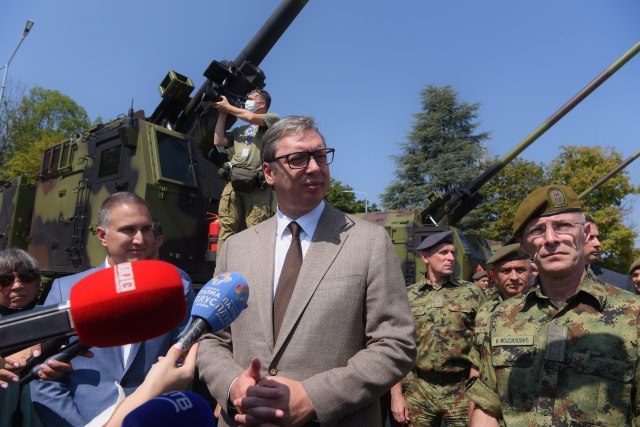 Vučić referred to the announcement of the European External Action Service (EEAS), which expressed concern over "the increase in inflammatory rhetoric between the officials of Belgrade and Pristina" and said that he has no comment. "That's for the best," stated Vučić.

"We are going to Brussels to try to preserve peace, that is our only goal. We just want to ensure respect for international rules, international legal norms, valid agreements and resolutions, from Resolution 1244 to the Brussels Agreement, which must be respected," Vučić said.

"And as for Kurti's reasons, I tried a million times to get into his head, but that can only be done with rational people," says Vučić.

He announced a meeting with Stoltenberg and Escobar ahead of the meeting in Brussels, while in Brussels, as he says, he expects to discuss the CSM, but not to be told that it should be in accordance with the constitution of the so-called Kosovo.

"As far as I can see, they are not very interested in the constitution of Serbia, why should we be interested in their so-called constitution. When it comes to license plates, there is a clear situation. They can enforce them by force, but do not expect Serbia to help you in the legal process regulation of the problem, as well as the fact that you can carry out a pogrom against the Serbian people. They dig cisterns, play like little children, and they know nothing about the state. We will discuss everything, we will raise all the issues, and whether it will make any sense or not, we will see in two days," said Vučić.

When asked whether Belgrade will put the topic of license plates on the agenda, because September 1 is approaching, when Pristina postponed the decision on reciprocity, Vučić said that we have no problem with the topics.

"We also want to talk about the CSM (Community of Serbian Municipalities), but not by Prishtina saying that we can buy self-adhesive stickers, stick them in an album, buy chewing gum and have someone tell us that the CSM must be in accordance with the so-called Kosovo constitution, because that's pointless, then we don't need it, and every citizen can establish such a community on a daily basis," said Vučić.

It was understood, by the Brussels Agreement, that the powers of the CSM would be much wider and greater. He added that only such decisions on license plates can be implemented by force, and added that it never occurs to anyone that they can resort to committing some kind of pogrom in the southern Serbian province.

Just to recall, the European External Action Service (EEAS) states that all open issues between Belgrade and Pristina will be resolved through dialogue on the normalization of relations between Kosovo and Serbia with the mediation of the EU and emphasize that the EU expects President of Serbia, Aleksandar Vučić, and Prime Minister of Kosovo, Albin Kurti to discuss these "challenging topics" at the next high-level dialogue on August 18 in Brussels.

About the protest against Pride

When asked about roadblocks, the president says that based on this question, he wants to show how things are going in Serbia:

"We will fulfill what is possible and what is realistic, and what is not, we will not. Whether someone will block the roads, that is another question. We should pay that price and participate in the trade margin - that's not possible. We can beg the traders, but we won't take the racket from them and pay someone else. Do what you want. And see how, as soon as someone protests, everyone is on their side," said Vučić.

According to him, the gathering last night was organized by a man who was convicted of domestic violence.

"What do you want from us? If we didn't have electricity and we turned it off every six hours, you'd say: Let's remove this garbage. If we have a parade, they say I'm queer and gay-friendly, if we don't have a parade, they say we don't have freedom. Tell me what you want and what is our fault. People must understand that we live in a market economy, not in communism," he said.

Serbian government will be formed before autumn, and there is no tension regarding that issue, President concluded.