Vučić on TV Prva: We know the names of our people who are on the list for liquidation

President of Serbia said on TV Prva that Pristina's actions do not contribute to easing of tensions, he'll go to Brussels to present current state of affairs. 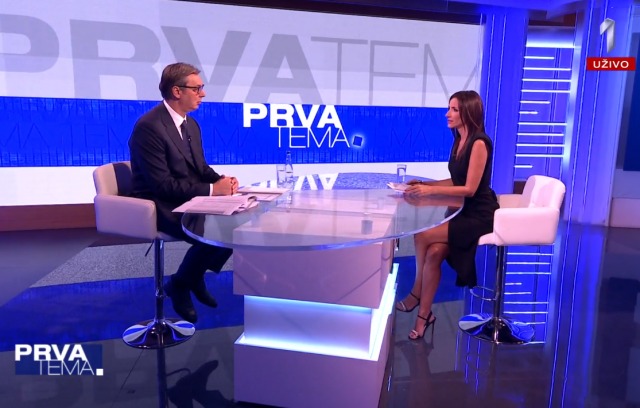 "I'm going to Brussels with a strong will to show them all the dangers and challenges that Serbia currently faces. They want to abolish the KM license plates, that's their only goal, it's not even to have theirs accepted, but to abolish these, and that's it. They have no right," he said.

"As well as asking for a declaration from those who have a Serbian identity card and live in Kosovo, they can do that for those who do not live in Kosovo, but for the Serbs who live there, that is not possible. They can, together with NATO, forcefully implement whatever they want," he said.

"The Albanians are behaving irresponsibly, as are their protectors, they are now in shock because I know that they were moving the units. Do you really think that I would think up that they want to liquidate our people in the north. Well, that was said on their meeting. They are now looking at how to find out how I know," explained Vučić.

"I went public with this in order to prevent it, but I don't believe that I succeeded in that. They will not calm down until they finish the north of Kosovo, they think that they have finished everything else. We will not allow the pogrom of our people. You can do everything else by force. I am not really into insulting this tortured Kurti... We are doing everything to maintain peace, almost at any cost, unless there is a pogrom and the expulsion of our people. They are laughing at our tractors, since they are probably much braver," he said.

The names of the candidates for Prime Minister

President of Serbia also spoke about the names of the candidates of the Serbian Progressive Party for the mandate of the new Government and said that there are two names in the list, namely Ana Brnabić and Miloš Vučević.

President of Serbia said that it is possible that the two SNS candidates for the mandate of the new government will be Ana Brnabić and Miloš Vučević.

"I am very satisfied with the work of Brnabić, very satisfied. But if you think that the choice of ministers is something that I dictate, it is not... Politics is a list of compromises, you cannot decide on everything. If you ask me, Ana was an outstanding prime minister," he said is.

"If she doesn't become prime minister, she will absolutely acquire an important position," he added. "Tell me the name of the one who can call me and tell me who should or shouldn't be a minister," he said.