Vučić and Scholz address the media after the meeting at the Palace of Serbia. 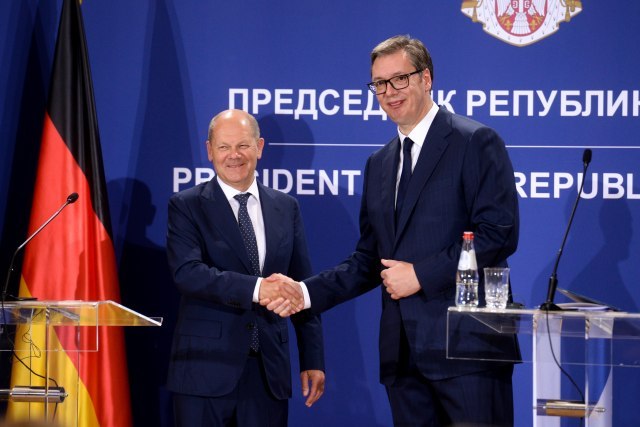 President of Serbia, Aleksandar Vučić, was the first to speak, saying that he was "the president of a country for which a conversation with the chancellor is much more important than the chancellor's with him."

"What people are going through is that Serbia and Germany are cooperating better in the field of economy. We have an increase in exchange of more than 25 percent compared to the previous year," he said.

He also spoke with Scholz about "not so easy issues".

They also talked about other topics on which we do not always have full agreement, about open issues of Belgrade and Pristina.

"I pointed out everything that was not fulfilled from the Brussels agreement. I understood the chancellor's message that it is important to make a number of smaller steps and we will do our best to make progress in relations with Pristina," Vucic said.

According to him, they also touched on the situation in Europe and the world.

"Chancellor Scholz called on Serbia to join in the sanctions against the Russian Federation 'in a determined and sharp manner', that is to support the restrictive measures that the European Union introduced and I spoke of our position and the specific situation with Kosovo, energy and traditional relations with Russia. We talked about the upcoming winter, I pointed out all the difficulties we are already facing today," Vucic said at a joint news conference.

He also stated that Chancellor Scholz was kind and fair and offered Germany's help in terms of building energy capacities that should connect us with the rest of the region.

"I informed him that we are building an interconnector to Bulgaria, that construction is planned to Macedonia. I am guilty that I did not remember in time that we need to build oil pipelines towards other countries," he stressed, adding that "if we have built pipelines towards Hungary, sanctions would not apply to us and we could buy oil cheaper by $ 30 per barrel."

"As you can see, no one is sure what will happen on European soil, and the chancellor offered to help us in that area," concluded President Vučić.

After the President of Serbia, German Chancellor Olaf Scholz also addressed the media. He spoke about the war in Ukraine, but also about the dialogue between Serbia and the so-called Kosovo, as well as the situation with Bosnia-Herzegovina.

When asked what is the position of Germany on the so-called Kosovo, Scholz said that he was clear, while the President of Serbia pointed out that "we heard today that mutual recognition is being sought."

As for the speed of joining the EU, Scholz said that it depends on how much those who want it try to fulfill everything they need, but also that the EU can contribute to increasing those ambitions.

"My goal is to succeed in that, and it would be good if it is accelerated now with great courage. Such processes have led to great changes in all countries, and that is normal," Scholz stated.

He also emphasized that the precondition is that everyone in the country is ready for those changes if their goal is EU membership. "If so, you will get our support in that, and our position on the issue of Kosovo has been known for a long time," he said.

After Scholz, Vučić answered the question, saying that he "has confidence in Scholz's words that he is very committed to the progress of the countries of the Western Balkans towards the EU."

Vucic said that Serbia will have to achieve faster progress in terms of rule of law, human rights and all other issues important for European integration. “We spoke of other important issues which are not always in full agreement on and that is Kosovo and the Belgrade-Pristina dialogue,” he added.

"If we make progress, I am sure that we will be able to see great progress in December. I expect great progress for everyone in the next year and we can be in a better mood when it comes to that, because Germany and its chancellor keep their word and will do everything. I also ask Chancellor Scholz to understand that I speak from the heart what the vast majority of the people of Serbia think," the President of Serbia was clear. Chancellor Scholz reiterated that he came to facilitate the EU accession process.

He said Germany’s stand on Kosovo is well known. “What we need now is more engagement in the process to achieve progress,” he said, adding that both sides have to contribute without blocking anything and taking the series of step leading to goal.

Scholz said that Germany can contribute to achieving the ambition of EU membership.

“That is something that I am committed to. It won’t be possible in six months, it will take time but it would be good to help it along with great courage. The accession process has brought great changes to every country. I want to encourage you and say that you can count on our support,” he said.

Vučić also reiterated that "Serbia has unequivocally expressed its position condemning the attack on Ukraine, not only in the UN but also in the OSCE and elsewhere."

"As for that, Serbia's position is very clear. As for sanctions, we have a different position for many reasons. One is - what is the difference when someone attacks Serbia without an EU decision and when someone does the same to Ukraine. We remember the sanctions and we don't think it's the right thing to do," the Serbian President stressed.

As he further said, we have different relations with Russia, but that did not prevent us from condemning those actions.

"I understand Chancellor Scholz's demands regarding sanctions, but I want to acquaint you with facts that are a little different. We have Russia's support for the Kosovo issue, not to mention energy sources."

He pointed out that Serbia is always to blame. "Even when Lavrov does not come to Serbia - Serbia is to blame, and when he goes to Turkey - no one is to blame. I believe much more in what Scholz said and we will give even more of ourselves to make our German partners happy with Serbia's progress. As for dialogue with Pristina... If you are satisfied, tell us that, but also if you are not, share that with us", Vucic added.

At the end of his address, President Vučić reiterated that Serbia respects the territorial integrity of Ukraine and that we have no problem with that.

"We are a small country in numbers, but what I heard today is important to me because I know that he spoke the truth and that it is up to us to continue to change ourselves and that we will have an ally and partner in Germany on the road to the EU." He thanked Scholz again for the visit and the conversation.

"I want to thank him for listening to us who have different views on some issues and that we will talk much more about the future. Thank you for visiting and with essential words of encouragement, although now everyone will talk about Kosovo. We have heard many great and important messages", President of Serbia, Aleksandar Vučić, concluded in his address to the media.

It should be reminded that German Chancellor Olaf Scholz arrived in Belgrade today, after his visit to Pristina, and he met with the President of Serbia face to face.

After the meeting, Scholz and Vučić addressed the media, and you can watch the address LIVE on TV B92 and B92.net.