Vučić: "We do not interfere in that war, you should not have invited me here" VIDEO

President of Serbia, Aleksandar Vučić, is staying in Bratislava, where he is participating in the annual "GLOBSEC 2022" Forum. 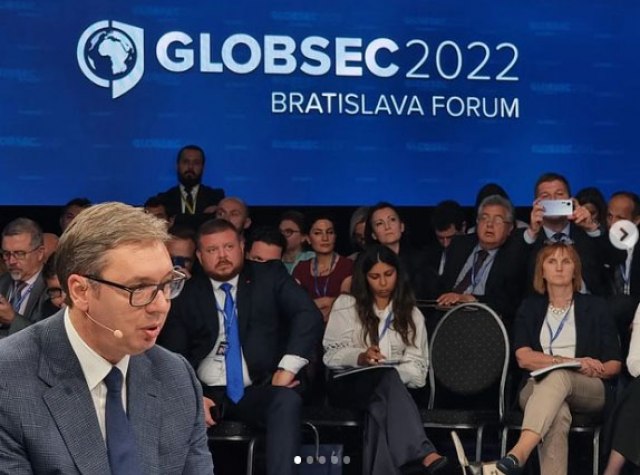 Vučić will speak at the panel "Serbia and the EU: Strategic Partnership for the Future" at 3 p.m.

"GLOBSEC 2022" is being held from today until June 4, and the focus of this year's gathering is on mobilizing support and action for Ukraine and the European Neighborhood, including the Western Balkan.

The President said that no one can survive without gas, and that our country received blue fuel exclusively from Russia. As he said, there are several countries that refuse to use Russian gas.

"We are doing everything we can to diversify our gas supply and we are working to see how we can get more gas from the pipeline and from other sources," he said.

"Nobody wants to hear these words, and it is very difficult to have rational talks, but our goal is to become an EU member, we have different views on the issue of Kosovo and some EU members. I spoke at the inauguration about the importance of reaching a compromise with Pristina, and we consider it very important", said Vucic.

Answering the question about the victory in the presidential elections, Vučić said that he won in the first round with 61% of valid votes, while his party won 43% in the parliament, with the second place winner gaining only 12%.

"The question is how it turned out that more right-wing parties got a lot of votes, mostly because of the war between Russia and Ukraine. Many of our voters turned against us because we voted to condemn Russia's attack on Ukraine, not because they don't like Ukraine but because they remember Serbia was bombed and they still say that you did not behave like that in the west when you bombed Serbia, Vucic said.

He emphasized yesterday that we do not position ourselves with Russia, we have clearly condemned what is happening in Ukraine, but it is true that Serbia has not imposed sanctions on Russia so far, but you must understand our position and that Russia and China have always supported the Kosovo issue", he said.

Vučić said that Serbia would not be part of the war in Ukraine and asked who helped Serbia in 1999.

"The same narrative was used as now, someone on the other side is now saying that he is doing this to prevent genocide. You should not have called me here because I do not belong to the mainstream political opinion", the Serbian president said.

Asked by the host whether now that Ukraine, Moldova and Georgia have applied for EU membership, Serbia will use the moment to speed up its process, Vucic said that Serbia has learned its lesson and that anyone from the Western Balkans will go to Brussels. We tell them that we have to speed up the processes because our people are tired of listening to the same stories and that nothing is happening, and that now we expect something to change and for Serbia to know its obligations.

"When it comes to the rule of law, media, human rights, some kind of compromise between Belgrade and Pristina, but the thing is that we need to see some determination on the part of the EU and its members," Vucic said.

"We are very grateful to the EU for helping with the floods, migrants and everything, but the question is whether you are really counting on us or not. If the answer is yes, then we can speed up, because I do not expect anything to happen to include Western Balkan into the EU soon. It could be Ukraine, Moldova, Georgia, Montenegro, Macedonia... nothing will happen to us soon," Vucic added. He added that he believes that the situation in Europe will be much clearer in December, and that he expects Serbia to get some clearer indications of what could happen.

Re: the sanctions against Russia

Speaking about the pro-Russian protests in Serbia, Vucic asked if he could make a joke.

"You know, when you google my name, you see the recent news that there were pro-Russian protests organized by Vučić's regime... but it was also a protest against me as I betrayed Russia, and when we recently reached an agreement with Russia on gas, Western media write that we have violated sanctions. What sanctions, there are no sanctions for gas?", said Vučić.

He added that he was very satisfied with the economic bloom of Serbia, as well as that Serbia had the highest cumulative GDP growth in Europe in the previous two years.

"I believe that people will remember me and my team for that and the projects we made. Our public debt is now much lower in relation to GDP than when I became president, we expected peace and stability, it was not easy because we are not politically neutral but we are militarily neutral for clear reasons in recent history. We have good cooperation with NATO in Kosovo and elsewhere. We have cooperation through the Partnership for Peace, we exchange views with NATO," he said.

As he said, Serbia has no problem with those who want to join NATO, but that our country has its own policy, which is to be militarily neutral. "Stoltenberg lived in Belgrade as a child and he helped us a lot to overcome some misunderstandings," Vucic reminded.

Asked about sanctions against Russia, he said that if someone asked him, he would have offered an advice, but no one asked him anything. "I do not believe in the policy of sanctions. We cannot harm anyone but ourselves and we are doing everything not to do that," he explained.

A solution for Kosovo and relations with Putin

When asked what is blocking Serbia's road to the European Union, Vučić said that he does not hide from the people that we must find a compromise solution for the good of all in the Balkans.

When asked about the attitude of the President of Russia, Vladimir Putin, Vučić said that Serbia was very loud when it said that it was defending the integrity of Ukraine.

"Serbia has not recognized Crimea as part of Russia and will not do that, we have principles, we will defend that right of Ukraine and more than many in the West. These are all obstacles we must overcome, we must overcome our history and we must do that, but one has to put oneself in our shoes and understand that it is not so easy and that the world is not black and white as it seems to many", he explained.

As he said, he does not believe in complete victories and defeats, and that in peace you can defeat the other side much easier. I don't see the point in killing and suffering that happens every day, it's not something that needs to be discussed at all. We need peace because of that, so let them agree, whenever, but one day of war costs a lot of human lives. I think peace is the only thing that matters. We need a solution as soon as possible, I told President Putin".

As he said, Putin explained to him that he had always been in for the goal and that he would fulfill all his goals. Serbian President Aleksandar Vucic met in Bratislava with EU Special Representative for Belgrade-Pristina Dialogue Miroslav Lajčák.

„I reiterated Serbia’s full commitment to the continuation of this process and efforts to arrive at a compromise aimed at establishing better relations between Serbs and Albanians. We agreed that, in addition to the preservation of peace and stability, regional cooperation is the one right path for the Western Balkans countries’ progress,“ said President Vucic.

Vučić met with the Vice President of the European Commission for Interinstitutional Relations and Foresight, Maroš Šefčovič, in the capital of Slovakia prior to meeting with Lajčák.